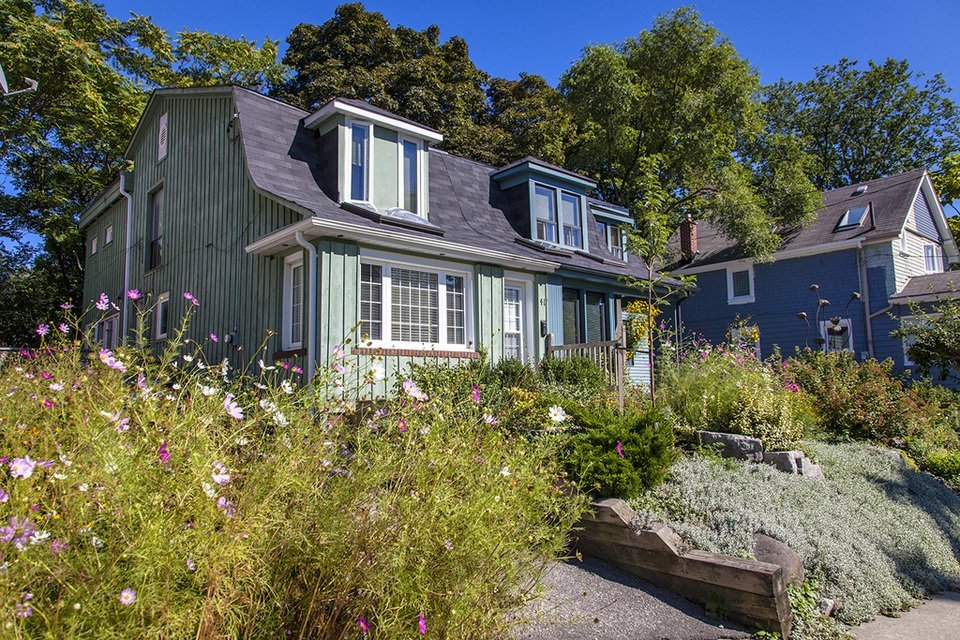 Wychwood Park, a gated community nestled in the greater Wychwood area, is an exclusive and stunning neighborhood. Tree-lined streets and large artist-inspired homes.

Wychwood Park is a small neighborhood enclave north of Davenport Road, west of Bathurst Street. It was formerly a gated community part of Bracondale Hill but is now considered by the City of Toronto as a part of the overall Wychwood neighborhood. The area is a private community that’s defined by Alcina Avenue to the north, Davenport Road to the south, Wychwood Avenue, to the west, and Burnside Drive to the east.

Wychwood Park is an exclusive enclave of sixty homes tucked away in a private ravine setting atop the rolling wooded hills of the Davenport Ridge. This community is unique in that it has its own executive council that oversees the private roads and parkland within the Wychwood Park neighborhood. The price for this privacy is a special park tax paid by every Wychwood Park homeowner. This tax varies depending on the size of each property.

The neighborhood really appreciate and take good care of the areas, and they contribute their own money to keep the community clean, safe, and historical. With every house part of a heritage site, the residents must appreciate the history and tradition behind each home on the street. Minutes from attractions like the Wychwood Barns and St. Clair West, shopping and entertainment are just a few steps away, but greenery and a peaceful calm surround the neighborhood. You get the best of both worlds in Wychwood Park.

All of Wychwood Park’s houses are listed on the Toronto Historical Board’s Inventory of Heritage Properties. Wychwood Park is an extremely unique and private area of the city, a special treat with greenery and quiet streets. A handful of the first Wychwood Park houses were built in the late 1800s, however, most of the houses in Wychwood Park were built in stages between 1906 and 1935. A few houses were also built in the early 1950s. Many of the older Wychwood Park houses were designed by Eden Smith, an architect who specialized in the English Arts and Crafts house style. The influence of Smith’s traditional English house forms is evident throughout Wychwood Park. Wychwood Park was designated an Ontario Heritage Conservation in 1985, many houses are listed as heritage properties, as reflected in their beautiful architecture, which reflects the English Arts and Crafts movement (1860–1910), featuring traditional English houses with naturally Romantic landscapes.

Wychwood Park residents enjoy convenient access to a large number of shops and restaurants along St. Clair Avenue West. There is also a limited amount of convenience-type shopping on Vaughan and Davenport Roads, and on Bathurst Street.

Nestled in a thickly wooded valley at the south end of Wychwood Park is the Taddle Creek pond. This pond is home to two swans named Oscar and Felix, as well as snapping turtles, painted turtles, goldfish, and mallard ducks. In the wintertime, the pond is used as a skating rink. Near the pond is the Wychwood Park tennis court which is so tangled in the underbrush that it is barely visible from the street above.

Other Nearby Recreation and Fitness Centres

The Wychwood Public Library and the Hillcrest Community Centre are both located on Bathurst Street, within a short walk of the Wychwood Park neighborhood.

Both the bus service on Davenport Road and the streetcar on St. Clair Avenue connect passengers to the Dupont station on the Yonge-University-Spadina subway line. The Bathurst bus connects passengers to the Bathurst station on the Bloor-Danforth subway line. Motorists are approximately ten minutes from downtown and about the same distance north to the Allen Expressway off Eglinton Avenue.

“Oakwood has been a place of excellence for 107 years. We are proud of our tradition and our commitment to students, parents, and staff. Oakwood offers Extended French and a Specialist High Skills Major in both Arts and Culture and in Sports. We are a “Triple-A” school — we provide outstanding curricular and co-curricular programs in Academics, Athletics and the Arts, and our music, drama, visual arts, dance and athletic programs are highly regarded.” As originally published by Oakwood Collegiate Institute

“Winona Drive Public School is located south of St. Clair Avenue West between Bathurst and Dufferin streets. The building was constructed in 1959 as a fourth addition to McMurrich Junior Public School. Although McMurrich and Winona are physically joined, they are separate in terms of administration, teaching staff, and grades/programs offered. Winona Drive Senior Public School strives to provide excellence in education for the young adolescent. Through partnership with the home, our staff provide opportunities for our students to learn and grow intellectually, socially and emotionally. Students have clearly outlined responsibilities which accompany their rights. We have expectations of them, and for them, both in the classroom and beyond.” As originally published by Winona Drive Senior Public School

“In 1912, a new school proudly bearing the name of the first chair of the Toronto School Board opened its doors at 115 Winona Drive. Today, over 100 years later McMurrich Junior School is a robust thriving community of educators, support staff, parents and highly motivated children. It is a community where students are helped to discover their dreams and aspirations in life. We offer a comprehensive school program for students in Junior Kindergarten to Grade 6.” As originally published by McMurrich Junior Public School

“Wychwood School provides a strong liberal arts education for elementary school children. At Wychwood, we don’t praise children for their intelligence or the ease with which they learn new concepts and skills. We praise them for their effort, commitment to practice, and tenacity in the face of academic or athletic challenges. We view mistakes as opportunities for learning and foster this attitude in our students. These foundational educational commitments allow us to help students develop a mastery-oriented mindset– a practice based upon well-substantiated psychological and pedagogical research findings – that nourishes the development of internal motivation and resilience in the face of challenging new material. This orientation allows us to deliver a particularly enriching program for children in science and math, areas in which children sometimes assume that they are less capable of excelling than they are.” As originally published by Wychwood School

“Our school is committed to developing and celebrating the unique gifts of every student. We, as a school community, strive to provide each student with the opportunity to develop his/her potential intellectually, physically, socially, emotionally and spiritually.” As originally published by St. Bruno – St. Raymond Catholic School