Homes for Sale in Niagara, Toronto. 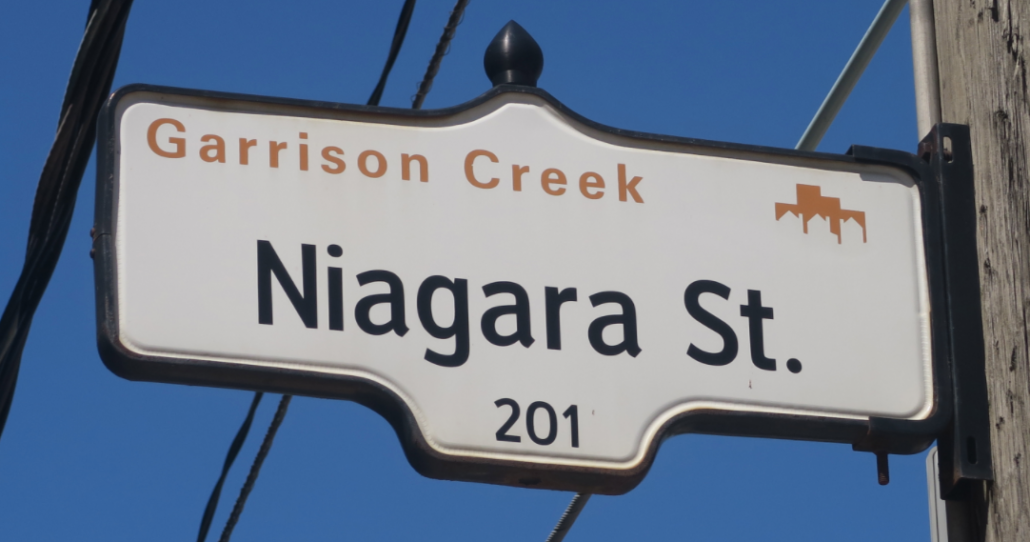 Pet parents will love a couple of times a day at its well-used dog park, unique homes on the side streets of this neighborhood, and some gorgeous condo and loft spaces are all here in this neighborhood.

The Niagara neighbourhood has a rich history that dates back to 1793, when it was part of a military garrison for the fledgling Town of York. Old Fort York, is still standing on Garrison Road, between Bathurst Street and Strachan Avenue. Street names in the Niagara neighbourhood are reminders of its military past. For example: Stanley Street is named after the former Stanley Barracks now located on the Exhibition grounds, Niagara Street is named after the former military capital of Upper Canada, and Tecumseh Street is named for the great warrior chief of the Shawnee, who fought for Canada, in the war of 1812. The second chapter in this neighbourhood’s history began in the 1850’s, when Niagara emerged as a prominent industrial centre. Niagara’s factories and mills created a demand for workers housing which led ultimately to the residential development of the Niagara neighbourhood in the mid to late 1800’s.

Strong sense of community that exists in Niagara, Toronto.

Niagara is a mixed residential and industrial neighbourhood. As of 1994 the City of Toronto had recorded approximately 3,107 dwelling units, and 647 industrial firms in the Niagara neighbourhood. This neighbourhood is now in transition however as the trend is towards more residential accomodations and less industry. The physical and social centre of Niagara is Stanley Park, a multi-recreational facility that is well used by area residents. Niagara offers convenient access to Toronto’s business and entertainment districts. It is also very handy to the Skydome, Exhibition Place, the Harbourfront, and the Toronto Islands.

Niagara’s historic Second Empire row houses and cosy one storey Ontario Cottages were built in the mid to late 1800s. The Niagara neighbourhood also contains a plethora of new townhouse developments commonly known as King West Village. Many of these are stacked townhomes with small patios or rooftop patios. There are also a number of new condominium buildings in this neighbourhood.

Niagara is a close knit neighbourhood with its own small community centre located on the Stanley Park grounds. This centre is used for local residents meetings, community based programming and social functions. Stanley Park is a favourite neighbourhood meeting place. It contains two baseball diamonds, two tennis courts, a soccer field, a small outdoor pool, and a children’s playground. Fort York located on Garrison Road was the scene of the bloody Battle of York during the War of 1812. Today this important Toronto landmark serves as a museum where knowledgeable historical interpreters, wearing period costumes, conduct tours and demonstrate historical activities. Fort York also contains a variety of exhibits and displays.

“Givins/Shaw Public School serves students from kindergarten to grade 5 and is at the hub of a vibrant and growing community in the west end of downtown Toronto. We are a small school with a big heart; we have gained a reputation in the community as being warm, welcoming and inclusive. Our students are provided with a rich and balanced education. Parent volunteers play a big role in bringing to our students expanded Art, Music, and Technological experiences; as well as supporting Greening initiatives and Athletics.” As originally published by Givins/Shaw Junior Public School

“Parkdale has a reputation as the “gem” of our community. We are characterized by our caring, inclusive and welcoming learning environment. Our programming is continually evolving to meet the needs and interests of our students in our changing community; our diversity is our strength and we proudly welcome all students. Our programs include an enhanced PreBaccalaureate program to prepare students for our International Baccalaureate Programme, and a Specialist High Skills Major (SHSM) in Horticulture and Landscaping. We are a dynamic learning community, located with easy access to the TTC, where everyone has opportunities to get to know one another.” As originally published by Parkdale Collegiate Institute

“Our school serves the community bounded by York Street on the east, Stadium Road on the west between Lakeshore Blvd and Queens Quay West. We are a diverse population including grades from Junior Kindergarten to Grade 8. Ours is an inclusive approach to education and schooling, for which we have received recognition from the Toronto Community Living Association and the Director of Education of Canada’s largest school board.” As originally published by The Waterfront School

“Alexander Muir/Gladstone Ave (AMG), an inner city school in the Dufferin/Dundas area, is comprised of two schools joined together in 1982. The school also houses an alternative school, integrated international languages, adult ESL day programs, a Parenting and Family Literacy Centre and a YMCA child care program. Alex Muir, a Scottish-Canadian poet and songwriter who composed the lyrics to the song, “The Maple Leaf Forever,” was the first principal of the school. At AMG, staff and students work collaboratively to create a positive learning environment where all students are respected and valued as individuals.” As originally published by Alexander Muir/Gladstone Ave Junior and Senior Public School

“Since 1892, Harbord Collegiate Institute has had a long tradition of academic excellence and a faculty committed to preparing students well for postsecondary studies and for their role as responsible and productive members of our society. The school has a current enrolment of 1100+ students and a staff of over 95. Harbord offers many university and college preparation courses leading to a wide range of postsecondary destinations. Our focus on social justice, equity and the environment sets the framework for a dynamic education. More than one-third of our teachers and support staff speak multiple languages, reflecting Toronto’s rich diversity. Staff and students work together to promote a safe and nurturing environment.“ As originally published by Harbord Collegiate Institute

“Queen Victoria Public School was founded in Parkdale in 1887. We are an inner-city school serving over 700 students coming from many different countries. Many of our students have arrived recently in Canada. The Queen Victoria community is proud of our new school which was built in 1999. We have a beautiful building adorned with student art work, murals, sculptures and displays. Recently the community lobbied to improve the play area in “Horsey Park”, a play area serving the kindergarten, grades one and two, and the community. We negotiated a funding partnership of the TDSB, the City and the School Council. Our students and families are now enjoying a wonderful “top of the line” set of play equipment that is always busy!” As originally published by Queen Victoria Public School

“Discovering Minds Montessori School Casa (Preschool, JK / SK) Program is rooted in the philosophy of the educator and pioneer in child development, Dr. Maria Montessori. The program for children aged 30 months to 6 Years offers an early childhood program that creatively engages each child’s potential for learning in their formative years. Through Montessori-based methods, math and language skills are developed. Practical life skills help children become independent and cooperative members of the community. Daily activities ground the children in self-care and care for one another and the environment.” As originally published by Discovering Minds Montessori

“By providing excellent opportunities for spiritual, physical, emotional, and academic growth, children have the tools to become independent and empowered individuals of the future. This school provides a safe, inclusive and healthy environment for learning that is faith-based. Thus, student success is measured by improved achievement in all areas of the curriculum as well as the child in his/her entirety.” As originally published by St. Josaphat Catholic School

“The teachers at Holy Family strive to meet the individual needs of our students by providing comprehensive programming and a safe learning environment. Holy Family School provides a learning environment where models of Gospel values and Catholic doctrines, teachings and beliefs are an integral part of the daily life of the school.“ As originally published by Holy Family Catholic School

“As a Catholic community the Gospel teachings are at the heart of what we do every day. We strive to provide an environment focusing on self-worth, self-discipline and respect among all stakeholders in our community while helping your children achieve their potentials.“ As originally published by Pope Francis Catholic School