Homes for Sale in Riverdale, Toronto 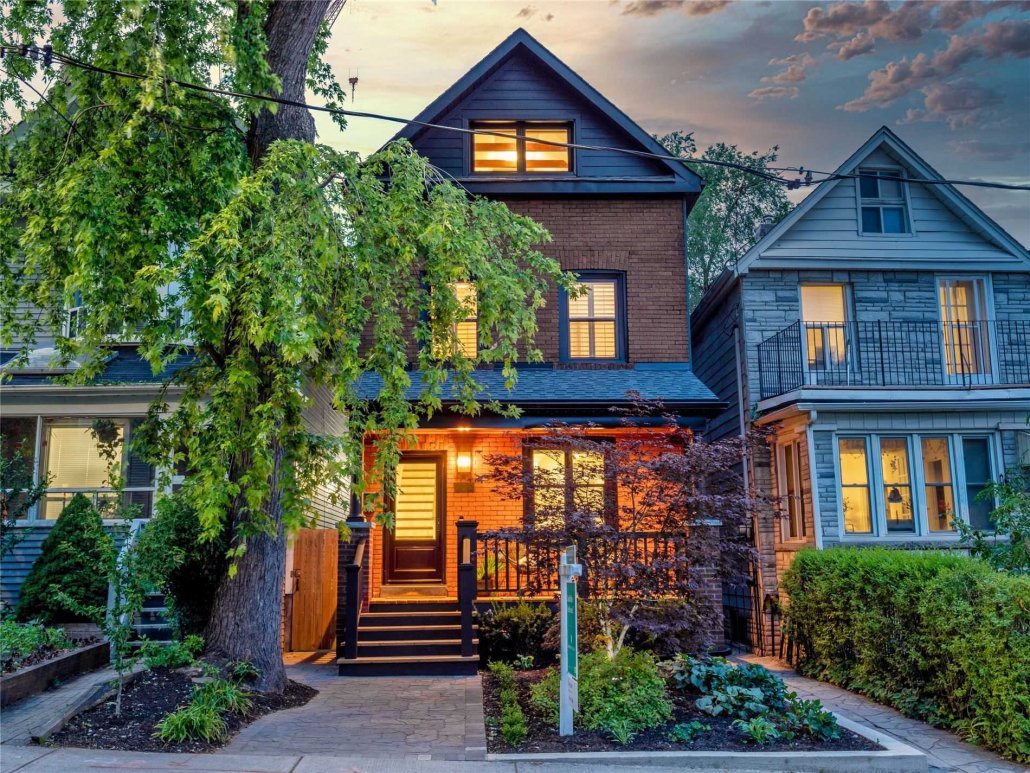 The Riverdale community is seen as the gateway to Toronto’s east end. It’s a large, diverse neighborhood that’s especially known for its colorful shopping districts and quaint Victorian homes.

Riverdale, Toronto a lovely mix of an old-and-new neighborhood.

This is a high-density urban neighborhood that is also blessed with an abundance of parkland where one can escape the hustle and bustle of big city living. Riverdale Park to the West is one of the largest green spaces in the city.

The early years, its history dates back all the way to the late 18th century. Similar to many neighborhoods, it was originally settled because of the river in the area.

Riverdale was a small rural community until the Grand Trunk Railway began steaming through here in the 1850s.

The Grand Trunk Railway was created in 1850s and had a big impact on Riverdale. Workers’ houses were soon built in nearby Leslieville which led to the creation of roads, bridges and infrastructure.

The railway brought industry and employment opportunities to Riverdale. It also attracted a pool of laborers who built the first homes in Riverdale, south of the railway tracks. North of Queen Street Riverdale remained largely undeveloped until 1884 when it was annexed by the City of Toronto. At that time Riverdale was called Riverside. The name was probably changed to Riverdale as a reference to the city park of the same name, which has long been a landmark in this area.
Riverdale’s development was accelerated in 1918 with the building of Toronto’s largest bridge, the Prince Edward Viaduct. The Viaduct provided Riverdale with an important link to the City of Toronto, west of the Don River, and marked a coming of age for this popular Toronto neighborhood.

Riverdale is the gateway to Toronto’s east-end neighborhoods. It is a large and diverse community that is especially well known for its colorful shopping districts and quaint Victorian homes. This is a high-density urban neighborhood that is also blessed with an abundance of parkland where one can escape the hustle and bustle of big city living. Riverdale Park is one of the largest green spaces in the city. Its steep hills are a favorite of tobogganers. Withrow Park is a neighborhood hub and meeting place with a popular farmers’ market. Top-ranked schools, great shopping, and convenient access to public transit have attracted many families to this popular neighborhood.

Riverdale’s best-known shopping district is along Danforth Avenue, east of Broadview. The Danforth is the heart of Toronto’s Greek community. It features many first-class Greek restaurants and a dazzling array of stores. These include a mix of trendy and traditional shopping as well as a huge selection of fabulous restaurants. In the summertime, the sidewalks are overflowing with colorful planters, fresh local produce, and all year round you’ll find couples strolling, parents chasing toddlers, singles cycling, and dogs stopping for friendly bowls of water as they all make their way down the long, vibrant Danforth strip. Riverdale also has a Chinatown shopping district centered around Gerrard and Broadview. This stretch of the store is known for its bakeries, grocery stands, and restaurants. Another shopping destination point for Riverdale residents is Queen Broadview Village. This historic shopping district includes some interesting antique and collectible stores. Gerrard Square located at the corner of Pape Avenue and Gerrard Street is a large indoor shopping mall with over 70 stores.

Riverdale has a myriad of parks and parkettes situated throughout the neighborhood. The three largest parks are Riverdale Park East, Withrow Park, and Jimmie Simpson Park. Each of these Parks contains tennis courts, a wading pool, a hockey rink, and a baseball diamond. Riverdale Park also has an outdoor pool and a running track. The Jimmie Simpson Recreation Centre has an indoor swimming pool, a games room, and a gymnasium. The Pape Recreational Centre has a gymnasium, an indoor pool, a weight room, and meeting rooms. Riverdale has four public libraries that offer a myriad of programs for children, adults, and seniors.

Riverdale is an ideal location for commuters. The Don Valley Expressway, Lake Shore Boulevard, and the Gardiner Expressway are all quickly accessed from this neighborhood. Riverdale also has excellent access to public transit. There is regular bus service or streetcar service on Broadview, Carlaw, Jones, and Greenwood Avenues, as well as Queen and Gerrard Streets. The Bloor-Danforth subway has five stations serving Riverdale, including Broadview, Chester, Pape, Donlands, and Greenwood.

“Frankland strives to provide a safe and caring learning environment where each child has the opportunity to reach a high level of achievement and develop the knowledge, skills, and values to become a responsible member of our Canadian society. We are proud of the unique community culture and sense of belonging fostered within our school, and encourage participation in a wide variety of activities. In focusing on academic excellence, responsible self-esteem, and respect for all members of society, our students are encouraged and guided to reach their full potential. At Frankland, we honour the partnership between school, home, and community. We believe that together we can make a difference for the future of our children.” As originally published by Frankland Community School

“Earl Grey provides excellence in education for our adolescent students, as well as a full range of quality co-curricular activities ranging from athletics to leadership opportunities. Through partnership with the home, staff provides opportunities for students to learn and grow intellectually, socially and emotionally. Character Education drives Earl Grey’s Caring and Safe school vision, which links to our school-wide Code of Conduct. Each member of our community has clearly outlined responsibilities which accompany her/his rights.” As originally published by Earl Grey Senior Public School

“Pape Avenue School at its present site, the corner of Pape and Langley Avenue, began as a four-room school on April 10, 1899. The principal and two teachers taught six classes from grade one to grade three. As the population grew, several additions were made to the building from 1908 to 1914, with the newest wing built in 1958. Originally consisting of a population mainly of British heritage, today Pape Avenue School is a community of students from diverse cultural, linguistic, and socio-economic backgrounds. The school celebrated its 100th anniversary on April 17, 1999.“ As originally published by Pape Avenue Junior Public School

“Montcrest School is a co-educational, independent school that provides children from Junior Kindergarten to Grade 8 with a solid academic foundation for future success in education and life. Our campus overlooks Riverdale Park in the Broadview and Danforth area of Toronto.” As originally published by Montcrest School