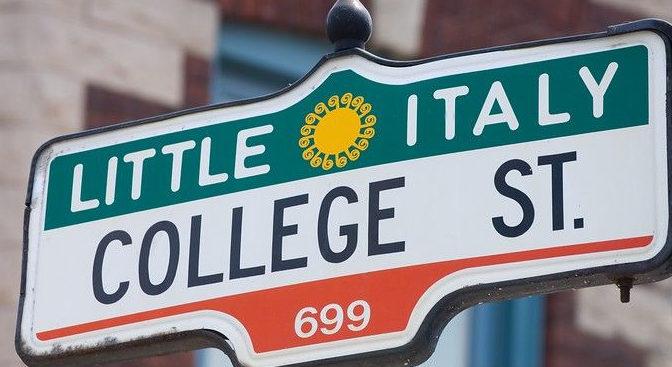 It was during the 1920’s that College Street’s ‘Little Italy’, became recognized as the residential and commercial centre of Toronto’s Italian community.

However, by the 1960’s, many of Little Italy’s residents began to move north to the the Corso Italia district on St. Clair Avenue West.

The Italian families that moved out of Little Italy were replaced by Portuguese, Chinese, Vietnamese and Spanish families. This mix of cultures gives Little Italy the international flavour that it enjoys today.

In 1985, the local business association on College Street officially adopted the Little Italy name in recognition of the role this neighbourhood has played as the starting point for Italians in Toronto.

Little Italy is not an exclusively Italian neighbourhood, as its name might suggest. While there is still a strong Italian community in this neighbourhood, there is also a large Portuguese population centred around the First Portuguese Canadian Cultural Centre on College Street, and the Portugal Village shopping district on Dundas Street West.

Today, Little Italy’s Italian and Portuguese residents are welcoming new neighbours from around the world to what is now considered one of Toronto’s most multi-cultural neighbourhoods.

The majority of Little Italy’s row-houses and attached Victorian homes were built between 1880 and 1910. These houses are set on narrow tree-lined streets with parking facilities located at the back of the property, off a rear laneway.

The First Portuguese Canadian Cultural Centre at 722 College Street, has recently undergone a major renovation/expansion. The centre’s facilities include lecture halls, a games room, a bar, meeting rooms, and a restaurant. Evening programs range from performances of Fado music to dances.

The College/Shaw Public Library serves as a community meeting place and offers reading material in a number of languages, that reflect the general population of the area.

Motorists are within ten minutes of the Gardiner Expressway and Lake Shore Boulevard.

“Montrose Public School is located in a multicultural area of downtown Toronto near College and Grace Streets. Montrose is a community-based school that values the contributions of its multi-ethnic, multi-generational community. The school has a population of about 155. The school building is shared by Montrose Daycare, an infant through school-age daycare center, and Delta Alternative Senior School. Montrose Public School has a variety of After School Programs, including Dance, Homework Club, Chess, and Sports. We also have our International Language Programs after school with language instruction in Portuguese, and Mandarin.” As originally published by Montrose Junior Public School

“Dewson is a dynamic, vibrant community school with a rich history of excellence in education since 1884. The original school (corner of Concord Avenue and Dewson Street) consisted of a basement and four rooms on two floors. The school opened December 1884 with 76 pupils. Today Dewson offers both English and French Immersion classes for Kindergarten to Grade 6. The school serves over 500 students with key enrichment opportunities in Social Justice programming and the Arts – dance, music and visual art.” As originally published by Dewson Street Junior Public School