Homes for Sale in Leslieville, Toronto 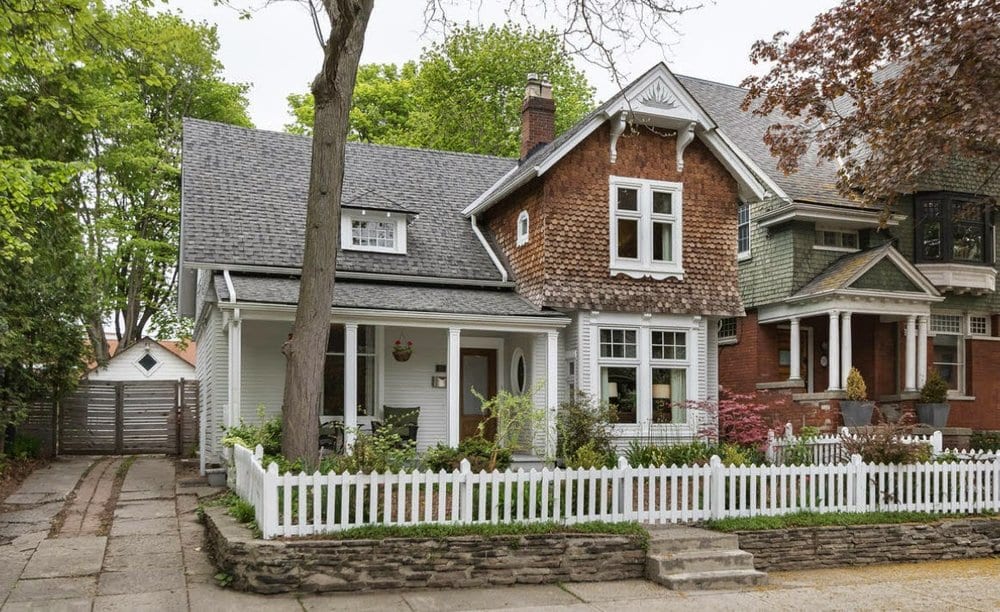 This family-friendly neighborhood was once hailed by the NY Times as the next Williamsburg. Its coffee shops, restaurants, and indie shops serve as background for numerous film and TV productions.

What began as a small village in the 19th century has blossomed into a highly sought-after area. Resting along the shoreline of Lake Ontario, Leslieville owes its name to the famous gardener and nursery owner, George Leslie. Take a look at how this nursery-filled nook has evolved into an effortlessly cute – and always Instagram-worthy – neighborhood.

Leslieville began as a small village back in the 1850’s. The village grew up around the Toronto Nurseries owned by George Leslie and Sons after whom this neighbourhood is named. Most of Leslieville’s first residents were either market gardeners or were employed at one of several brick making companies that used to operate in the area. One of the first buildings in the village was the Leslieville Public School, which was built in 1863. Leslieville’s first principal was Alexander Muir who composed “The Maple Leaf Forever”. Muir’s poetic verse was inspired when a brilliant autumn maple leaf fell from a Leslieville tree onto his jacket. This moment in Canadian history is memorialized by a historic plaque at the intersection of Laing Street and Memory Lane.

The green and white Leslieville street signs that run along Queen Street were installed in 1987. These historic markers are symbolic of a renewed interest and pride in Leslieville among the residents of this quiet east end neighborhood. Leslieville still feels very much like a small village. Its cozy houses, quaint stores, and tree-lined streets seem surprisingly serene and peaceful considering Leslieville’s close proximity to downtown Toronto.

Leslieville’s older houses along Queen Street and south to Eastern Avenue were built in the late 1800s. They include Ontario Cottages, Second Empire row houses, and quaint Victorian houses. Leslieville’s second generation of houses, north of Queen Street, was built in the early 1900s. This district includes detached and semi-detached houses. There are also a number of bungalows, that are among the tiniest houses in Toronto.

Leslieville’s main shopping district runs along historic Queen Street. Most of these stores are small independently owned shops that cater to the specific needs of the local residents. The area on Gerrard Street East between Greenwood Avenue and Coxwell Avenue is known as the ïIndia Bazaar’. This is the commercial center of Toronto’s East Indian community. The smell of incense and the sound of music provide an exotic backdrop to the shops on this street. The clothing stores sell imported silk fabrics, and the restaurant vendors barbecue spicy corn on the cob out on the sidewalk.

Greenwood Park has three baseball diamonds, an artificial ice rink, a pool, and a playground. The Jonathan Ashbridge Park on the south side of Queen Street features two tennis courts, a children’s playground, and a wading pool. The S.H. Armstrong Community Recreation Centre on Woodfield Road, has a gymnasium, an indoor pool, a fitness room, a craft room and meeting rooms. The Gerrard/Ashdale Public Library has a wide variety of programs for children, adults and seniors.

Leslieville is well served by the public transit system which operates bus or streetcar routes on Carlaw, Jones, Greenwood, Coxwell, and Eastern Avenues, as well as Queen and Gerrard Streets. Most of these bus routes link up with stations on the Bloor-Danforth subway line. Motorists can be downtown in minutes. Lake Shore Boulevard, the Gardiner Expressway, and the Don Valley Parkway are also close by.

“Founded in 1807, Jarvis C.I. is the first public high school in Toronto and has a long tradition of academic excellence and student involvement. Jarvis is committed to providing a rich and varied program encouraging higher order thinking as well as research and communication skills. Over 90% of our graduates attend university, including top schools like U of T, Waterloo, Dalhousie and Queens. Over 53% of graduates are Ontario Scholars and 60% receive scholarships / bursaries. Situated in the ‘heart of the city’ at Jarvis and Wellesley, our school has a rich mix of students from over 100 countries of origin, integrated into one unified, vibrant community in which diversity is our strength!” As originally published by Jarvis Collegiate Institute

“Nelson Mandela Park Public School is an inner-city school offering JK to Grade 8 programs. We are located in the heart of Regent Park in a recently rebuilt state of the art building that is bright, beautiful, and filled with lots of amazing spaces for learning. We have a student body of just over 500 students that is incredibly diverse with over 30 different home languages represented at our school. Nelson Mandela Park PS has a dedicated staff who work their utmost to serve the needs of our school community. We are focussed on building a “Culture of Caring” at our school that addresses the social and emotional well-being of students, but also extends to caring about ensuring high-quality teaching and learning for all of our students.” As originally published by Nelson Mandela Park Public School

“Blake Street Junior Public School is located between Pape and Donlands, at the eastern end of Riverdale. It is within walking distance of Gerrard or Danforth. The school was built in 1970. Blake Street Public School serves children from nearly 40 different language groups including English, Mandarin, Cantonese, Urdu, Somali, Hindi, Pashtu and Farsi. This makes our school a well-balanced, multicultural, multilingual, multireligious community; a microcosm of Toronto and a world social education environment. We have a family emphasis. Our small size helps us know everyone individually.” As originally published by Blake Street Junior Public School

“Monarch Park is a welcoming, supportive and safe school. With the individual in mind, we strive to ensure that each student’s needs are met with support both inside and outside of the classroom. Our supports include the Tutors in the Classroom program, a dedicated social worker and other workshops/events that assist our students with their individual and collective needs. We focus on Global Education and our community is represented by over 70 different countries. Our students are encouraged to pursue excellence and lifelong learning in individual subject areas and in our International Baccalaureate Program.“ As originally published by Monarch Park Collegiate Institute

“Kew Beach School ensures effective curriculum delivery in all subject areas. We focus on strengthening reading, writing and math skills through the use of effective questioning techniques that encourage higher level thinking. We use information technology to enhance teaching, learning and communication skills. Focusing on Character Development, we encourage students to set high standards for behaviour and to make decisions that are empowering so that they have the knowledge, skills and values they need to become responsible citizens. We strive to ensure that strategies are in place so that all students are successful.” As originally published by Kew Beach Junior Public School

“Since 1907, Riverdale Collegiate has established a reputation for academic excellence and strong community involvement. Riverdale is home to a modern library learning commons and students regularly use technology to enhance their learning. The academic program is complemented by a wide variety of clubs and sports such as: the Riverdale Environmental Action Committee, SASSD, yearbook, athletics, music and theatre. Our school prides itself on a strong spirit of community.” As originally published by Riverdale Collegiate Institute

“Bowmore P.S. is a large, dynamic kindergarten to grade 8 learning community of approximately 860 students and over 80 staff members. Our school is situated in the Upper Beaches, and it was created by the twinning of two former schools in 1989 (Bowmore Road P.S. built in 1923, and Fairmount Park Senior School built in 1963). The school houses a variety of programs, including French Immersion, Grade 7 and 8 Extended French, Gifted Intensive Support Programs and Learning Disability Intensive Support Programs. Bowmore takes pride in providing multiple ways of supporting student interests and needs, which is what makes it such a wonderful place to learn!” As originally published by Bowmore Road Junior and Senior Public School

“Dundas Public School is a downtown school located in the South Riverdale area. The original building was built in 1917, with a large addition constructed in 1961. The school serves almost 280 students of multicultural background. Approximately one half of the children’s first language is Cantonese or Mandarin. We share our building with First Nations School of Toronto. The school site is a multi-use site shared with Dundas Kindergarten Enrichment Program, Head Start Program, Queen Alexandra Middle School and S.E.E.D., an alternative high school.” As originally published by Dundas Junior Public School

“Leslieville P.S. has enjoyed a proud history in the Leslieville community. Today our school promotes academic excellence, offers a wide range of extra curricular activities including sports, writers clubs and choirs. Leslieville has about 350 students in Grades JK to 6. It is a community school with an active parent council. We provide a wide ranging curriculum and extensive extracurricular program.” As originally published by Leslieville Junior Public School

“Pape Avenue School at its present site, the corner of Pape and Langley Avenue, began as a four-room school on April 10, 1899. The principal and two teachers taught six classes from grade one to grade three. As the population grew, several additions were made to the building from 1908 to 1914, with the newest wing built in 1958. Originally consisting of a population mainly of British heritage, today Pape Avenue School is a community of students from diverse cultural, linguistic, and socio-economic backgrounds. The school celebrated its 100th anniversary on April 17, 1999.” As originally published by Pape Avenue Junior Public School

“At Morse Street Public School we nurture the partnership of students, staff, and parents to create and sustain a safe and caring environment where each child has the opportunity to explore and develop his or her academic potential and to acquire the knowledge, skills, and attitudes to become a responsible member of our Canadian society. We strive to foster independence and initiative in our students as well as the ability to work cooperatively with their peers and with adults. The diversity within our walls gives us the strength to build an inclusive, vibrant school community that encourages active participation in all aspects of school life. Welcome! As originally published by Morse Street Junior Public School