Homes for Sale in Leaside, Toronto 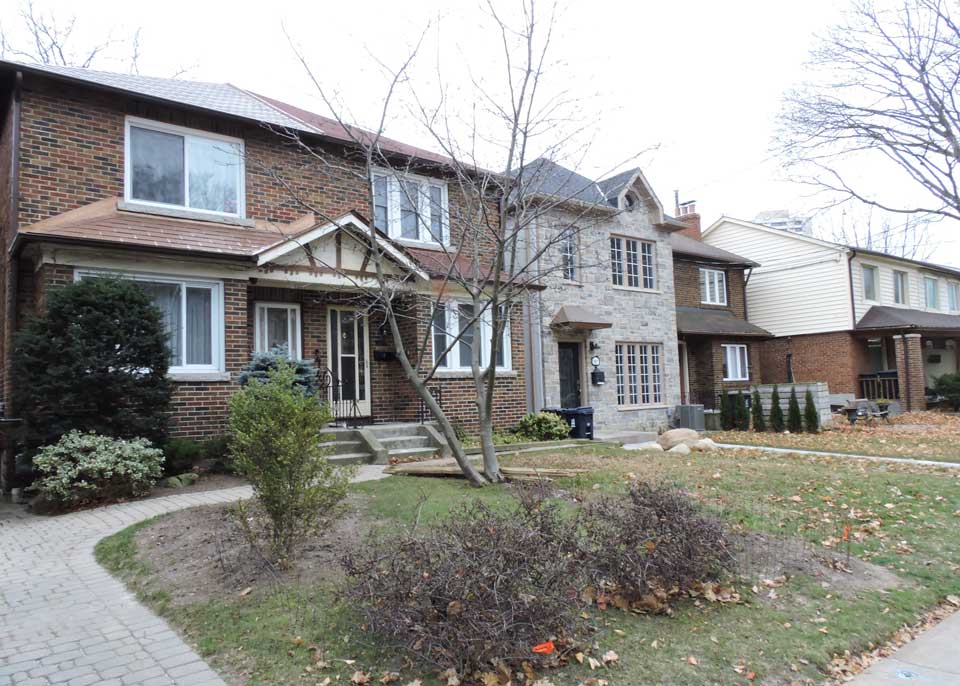 As a family-centric community, Leaside is one of Toronto’s poshest neighborhoods and has become a dining destination for residents of mid-town Toronto and beyond.

Leaside offers plenty of places to work, play, and relax – if you call playing ball, hockey, tennis, and skating, swimming, and tending to picture-perfect gardens relaxing! Walking dogs, babes in strollers, and toddlers on trikes is a way of life. Raising a family, taking part in activities, shopping, dining and just enjoying life in the shadow of the city, is what Leaside living is all about.

Leaside was first settled by John Lea a pioneer farmer who emigrated to Canada from Philadelphia in 1819. In the 1850’s, Lea’s oldest son William built an eight-sided octagonal shaped house – appropriately named ‘Leaside’ – near the present day site of Leaside Memorial Gardens. This neighbourhood has been called Leaside ever since.

The Canadian Northern Railway incorporated the Town of Leaside in 1913 on land formerly owned by the Lea family. Leaside’s development was historically significant in that it was the first town in Ontario to be completely planned on paper before any homes were actually built.

Leaside’s residential development was stalled due to the outbreak of World War I, however Leaside was an important contributor to the war effort. Heavy artillery was manufactured at the Leaside Munitions Company. Leaside was also the location of an airfield used for the training of Canadian pilots.

In 1918 the Leaside Airfield made Canadian aviation history as the terminus of the first airmail flight in Canada, travelling from Montreal to Toronto. Leaside’s status as a Town came to an end in 1967 when it became part of the Borough of East York, which has since amalgamated with the City of Toronto.

Leaside is in especially high demand with upper-middle-income families who value this neighborhood as an ideal place to raise children. Leaside has abundant greenspace and parkland, a fine selection of schools, one of Toronto’s best shopping districts on Bayview Avenue, and excellent access to public transit.

The typical Leaside house is situated on a generous size lot with a private drive and a garage. Most of the houses contain beautiful wood trim, hardwood floors and a working fireplace.

Leaside’s Tudor-style houses were built largely in the 1930’s and 1940’s. There is a good mix of two-storey detached homes, bungalows and semi-detached houses. A growing number of Leaside bungalows have had second storey additions, while others have been replaced by new custom designed homes.

During the 1990s a handful of exclusive condominium and townhouse projects have been built on the periphery of the neighborhood. Leaside also contains some of Toronto’s nicest rental apartment buildings, located on the east side of Bayview Avenue and on Leacrest Road overlooking the Don Valley Ravine.

Bayview Avenue features a wonderful collection of shops and restaurants. Many of these stores are geared towards children reflecting the demographics of this neighbourhood. Bayview Avenue is also known for its antique shops, specialty stores, and neighbourhood pubs, that attract a clientele from all over the city.

Leaside residents also shop at the local stores along Eglinton Avenue. This shopping district is anchored by the Sunnybrook Plaza located at the north-east corner of Bayview and Eglinton. There are also some small shops and services located in the interior of the Leaside neighbourhood on both McRae Drive and Millwood Road.

Leaside’s newest shopping destination is the Leaside Centre, a collection of large national retailers located at the south-east corner of Laird Drive and Eglinton Avenue. Adjacent to the Leaside Centre is the Leaside Business Park which combines light industrial businesses mixed in with specialty retail stores.

Few Toronto neighbourhoods can match Leaside when it comes to recreation. The Leaside Memorial Community Gardens at Millwood Road and Laird Drive is a multi-recreational complex that includes an indoor ice arena, an indoor swimming pool, a curling rink and an auditorium.

Trace Manes Park, located in south Leaside off McRae Drive is the home of the Leaside Tennis Club which has six tennis courts. Trace Manes Park also has a tots playground, a baseball diamond and an outdoor natural ice rink which is in use from late December until the end of February. The Leaside Public Library is situated adjacent to this park off McRae Drive.

Howard Talbot Park, situated in a picturesque valley at the south-east corner of Bayview and Eglinton Avenues features two baseball diamonds that are popular with local baseball leagues.

Motorists can be downtown in ten minutes via the Bayview extension which also links up with the Don Valley Parkway and a myriad of commuter highways.

Leaside garners high demand from upper-middle income families who value this neighborhood as an ideal place to raise children, thanks to its abundant green space, and fine selection of schools.

“Marc Garneau Collegiate Institute is one of the most diverse secondary schools in the TDSB. The secret to our student success stems from the many cultures that come together to create an amazing learning and social environment where students, staff and our community learn from one another. MGCI offers many unique programs; horticulture, financial securities, SHSM, and our TOPS program, proclaimed by Maclean’s magazine as “best across the nation”. We also have over 90 student-led co-curricular activities and a wide range of competitive team sports. At MGCI, we ensure that every student that enters our building has choice in programming and a safe learning environment where they fully apply their creative talents.“ As originally published by Marc Garneau Collegiate Institute

“Bessborough is a JK to grade 8 school located in the Leaside area of Toronto, a well-established community of mostly single-unit homes. It was the first public school in Leaside and at one point the Town Hall. Bessborough is a dynamic neighbourhood school with a tradition of academic excellence. Active and involved parents participate in the daily lives of their children. As well, many former students are now parents and grandparents of children attending the school.” As originally published by Bessborough Drive Elementary and Middle School

“Founded in 1945, Leaside continues to maintain a tradition of academic excellence. The size of our student population allows for a caring environment in which staff gets to know their students as individuals. We are dedicated to academic achievement and the preparation of our students for post-secondary education and life in a changing society. Leaside offers a semestered program from Grades 9 to 12. Each discipline offers a continuum of skill development to prepare students for a future of lifelong learning. Leaside offers a range of programs for students with diverse interests, including numerous languages, digital photography, forensics and communications technology.” As originally published by Leaside High School

“At CGS we believe in a balanced approach to education. Our challenging, personalized academic curriculum is complemented by excellent arts programming and physical education. We also place a strong emphasis on character and cultural programming. CGS students are encouraged to look beyond their own environment to make connections with the world around them.” As originally published by Children’s Garden School

“Maria Montessori School was founded in 1975 and for more than thirty years, has operated at the same location in North Toronto. In 1988 an elementary program for children between the ages of six and twelve was established seeing its first graduation in 1994. Currently the school supports a young children’s community (toddler), two Casa and two Elementary communities with a total enrolment of approximately one hundred and twenty five children. Utilizing the framework of the Montessori principles and philosophy, the school provides each child the opportunity to develop their abilities to their fullest potential within a safe, loving and affirming environment. Our staff are experienced and dedicated Montessori Educators committed to aiding and nurturing the development of the whole child. This, together with adherence to the fundamental principles set forth by Dr. Montessori, and an informed, active and caring parent body, creates an affirming, purposeful and harmonious atmosphere within which our children work, play and grow.” As originally published by Maria Montessori School

“Our Catholic Schools contribute to the formation of our children in their faith life. In partnership with the home and parish our students grow in knowledge of prayer, scripture and Catholic teaching. OLPH enjoys a strong partnership between home, school and the parish. Parent volunteers play an active role in enriching the educational experience of our children.” As originally published by Our Lady of Perpetual Help Catholic School