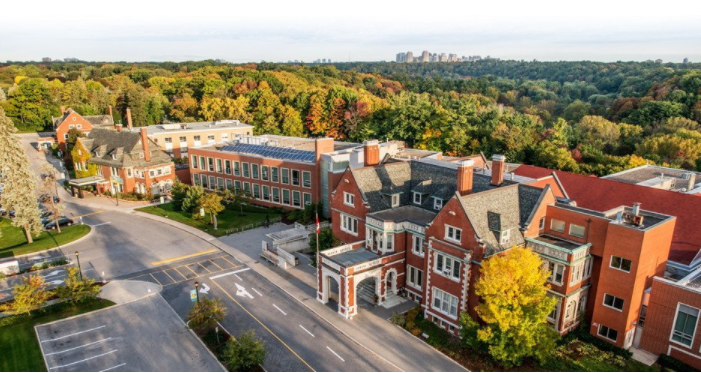 Lawrence Park was one of Toronto’s first planned garden suburbs, and residents continue to enjoy the peaceful setting.

Lawrence Park is one of Toronto’s most exclusive residential neighborhoods and one of the wealthiest neighborhoods in Canada. Living here is certainly sought after!
With close proximity to high-end amenities such as social clubs, upscale boutiques, fine dining, and highly-rated schools, living in Lawrence Park is coveted by the wealthy who wish to raise their children in a peaceful and tranquil setting that includes gently rolling hills, winding roads and a lush topography.
There’s even more to living in Lawrence Park:

Wilfred Servington Dinnick was the president of the Dovercourt Land Company. It was under Dinnick’s direction that Lawrence Park was developed as a suburb for the ‘well to do’.

The first advertisement for Lawrence Park trumpeted it as an ‘aristocratic neighbourhood’, ‘four hundred feet above Lake Ontario’, and ‘Far from the Lake Winds in Winter’.

Despite all its fanfare, Lawrence Park’s development was sporadic. The building of houses was interrupted by two world wars, a recession, and a depression. It wasn’t until the 1950’s that this neighbourhood was completely developed.

Lawrence Park is one of Toronto’s most exclusive residential neighborhoods. It is located in a very peaceful and tranquil setting that includes gently rolling hills, winding roads, and a lush topography. Lawrence Park’s shops, schools, and recreational facilities are located on its periphery, which keeps traffic on the residential streets to a minimum.

Lawrence Park is a strong family oriented neighbourhood with highly ranked schools. There is an active ratepayers association as well as various clubs that are organized at the local church. Executives value Lawrence Park’s proximity and easy access to the subway and highway 401.

Lawrence Park is a good place to find a house that blends the old with the new. Renovations in this neighbourhood have been sensitive to preserve the old world charm of these houses including leaded glass windows, wood trims around the door and window frames, decorative fireplace mantels and rich hardwood floors.

The first advertisement for Lawrence Park in 1907, trumpeted it as an ‘aristocratic neighbourhood’, ‘four hundred feet above Lake Ontario’, and ‘Far from the Lake Winds in Winter’. Lawrence Park has certainly lived up to its reputation as one of Toronto’s most exclusive neighbourhoods.

Lawrence Park homes start at $2 million and can escalate into multi-million dollar homes..  Lawrence Park offers premium size lots. with 50′ frontage being typical with some frontages as wide as  60′- 80 feet.

Lawrence Park homes are known for their traditional: Georgian, Colonial, Tudor and Craftsman style architecture. However newer homes with contemporary modern design are also now part of the mix.

What makes Lawrence Park so special is not its abundance of wealth but its tight-knit community. This is an area where neighbors are on a first-name basis. Socially it is a hive of activities and get-togethers. Children of families in the area generally know each other and it is not uncommon for them to form life-long friendships in this community that encourages togetherness and where locals often settle down and stay for some time.

Yonge Lawrence Village is a short stroll away This family-centric uptown shopping destination is earning its reputation as a happening, tight-knit community with a diverse offering of culture, food, and fun. The local BIA hosts various festivals and events throughout the year. Living in Lawrence Park also has the benefits of being close to the Yonge Street shopping district, Alexander Muir flower gardens & Blythwood Ravine Park, city restaurants and cafes–even a golf club (Rosedale Golf Club is just around the corner). The interior of the neighborhood is well-kept, quiet, and seemingly hidden from the outside hustle while placing residents close to major commuter roads (Yonge Street, Mount Pleasant), TTC (Lawrence subway station, Yonge streetcar) – not bad, not bad at all.

Most of this neighbourhood’s recreational facilities centre around Lawrence Park, east of Yonge Street, and south of Lawrence.

The George Locke Public Library at the north west corner of Lawrence Park offers a variety of programs for adults, children, and preschoolers.

Most Lawrence Park residents are within walking distance of bus routes that run along Yonge Street, Mount Pleasant Road, Bayview Avenue, and Lawrence Avenue. The Lawrence subway station, located at the intersection of Yonge and Lawrence, is part of the Yonge-University-Spadina subway line.

The Yonge Street on-ramp to Highway 401 is a five to ten minute drive from Lawrence Park.

“Allenby is situated in the Lawrence Park community. Its documented history dates back to the 1400s when a tribe of Huron Iroquois erected a longhouse village on the site. Modern-day development in the area led to the Toronto Board of Education deciding in 1926 to build a school. The school was named for Lord Edmund Allenby, one of Britain’s foremost soldiers. Opened in 1931, Allenby was renovated and enlarged in 1972 and again in 1994.” As originally published by Allenby Junior Public School

“Blythwood is located in a North Toronto residential area. The school was built over 85 years ago. In 1992, a multi-purpose room was added that serves as a recreational and meeting facility in the community. The school serves over 400 students from JK to Grade 6. Most of the children are from English speaking homes with a low rate of mobility. The school has a small Early Language Learner population. The school grounds border a ravine and are used extensively by the community all year round for sporting and other group activities. Staff work collaboratively to provide a positive and enriching learning environment for students. Parent volunteers work in partnership with staff to provide a rich variety of activities for our students.“ As originally published by Blythwood Junior Public School

“For over eighty years, Lawrence Park Collegiate Institute has been an important part of the North Toronto community. From the school’s inception, Lawrence Park’s teachers, students, and parents have worked together to support academic excellence. The school remains committed to providing a rich and varied program with many opportunities for students to become involved in extra-curricular clubs and activities that help develop strong leadership skills.” As originally published by Lawrence Park Collegiate Institute

“Blyth Academy Lawrence Park is an affordable private high school that has been wonderfully embraced by its families and neighbours. Active in and outside of class, Blyth Lawrence Park hosts several signature events including a city-wide Triathlon, a very popular Music, Art and Drama night, and works closely with the nearby Fairlawn Community Centre, Anytime Fitness, the Freehand School of Art, and more. Students attending this school will quickly feel known and a part of something warm and positive. We are also a quick walk to the beautiful Wanless Park and all of its amenities. Wildlife Photography in Algonquin Park; winter dogsledding, Outward Bound expedition offerings, and everyday classes offered in engaging and memorable ways…come and visit us and see why our growth has been so explosive! Our school has an average class size of seven which allows our educators to spend significant individualized time with each student while delivering a broad range of courses. When combined with first-class care and great teaching, wonderful things happen, and our students flourish. At Blyth Academy Lawrence Park we offer an outstanding Grades 9–12 program. Our campus offers a comprehensive full-time program, as well as part-time, private, integrated private and summer school classes. We are ministry inspected and adhere to all provincial standards, including the provision of an Ontario Provincial Report Card and official transcripts to post-secondary institutions. At Blyth Academy Lawrence Park, our classroom experience is unparalleled and unique.” As originally published by Blyth Academy Lawrence Park

“The location of our school provides fast and easy access to the whole of Toronto. Our location on Bedford Park is monitored on a regular basis to ensure a safe environment. Blessed Sacrament offers a complete program for junior kindergarten to grade 8.” As originally published by Blessed Sacrament Catholic School

“Our Lady of The Assumption School fosters students’ excellence in academics, facilitates students’ faith development and makes every effort to provide a safe learning environment for all of its members. With a steadily growing number of students who have been enrolled, Our Lady of The Assumption School is a welcoming place that reflects our values and beliefs. We strive to provide our students with many extra curricular opportunities and exciting educational opportunities. Moreover, we are a school focused on improving student learning and achievement.“ As originally published by Our Lady of the Assumption Catholic School