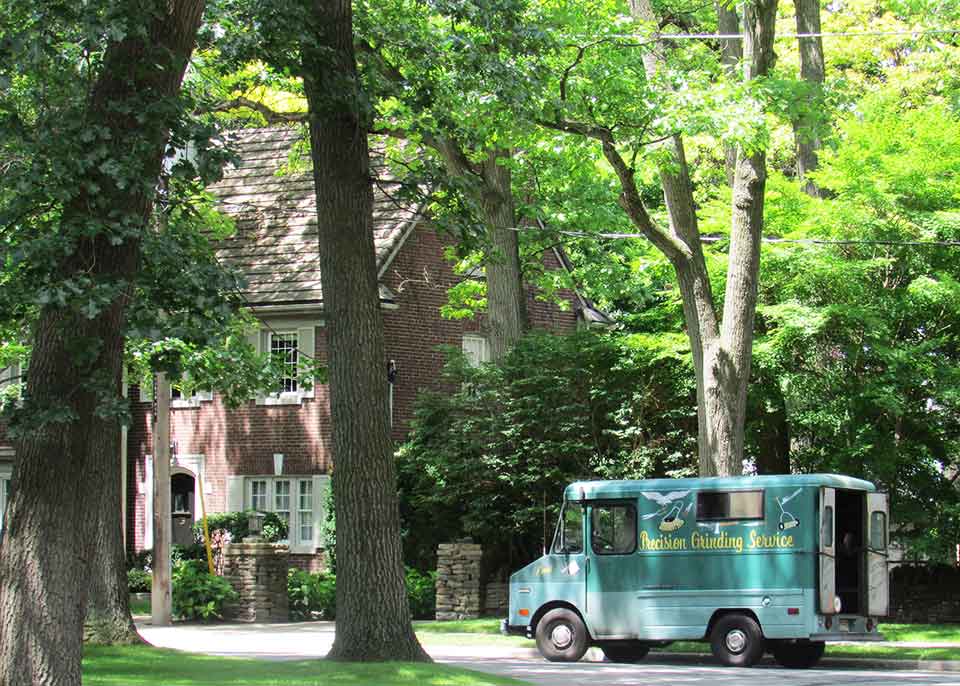 Baby Point homes are among the prettiest in Toronto.

Within five minutes of strolling Lambton Baby Point’s hilly terrain, you’ll quickly discover a quiet community of quaint commercial establishments and picture-perfect detached homes, concealed under a lush canopy of mature maples and oaks with the Humber River Ravine at their feet.

Baby Point’s rich history dates back to the 1600s when it was a prosperous Seneca Nation village known as Teiaiagon. The Seneca people found Teiaiagon to be the perfect location for conducting their fur trading activities as this high peninsula of land located in a bend of the Humber River, was easily defended from attack. The Seneca village had long since been abandoned when in 1816 the Honourable James Baby settled on this peninsula of land overlooking the Humber River. The present-day neighborhood is named after Baby, a member of a prominent Quebec fur trading family and a former politician in Upper Canada. Baby’s settlement was a virtual Garden of Eden. A lush apple orchard occupied much of the land, and salmon swam in the Humber River. There was even a spring of fresh water that flowed from the hillsides. This water was bottled and shipped around the world. Baby’s heirs continued to live in Baby Point until 1910 when the government acquired Baby Point to establish a military fortress and army barracks on this site. As fate would have it the government changed its plans and sold Baby Point to developer Robert Home Smith who began developing the Baby Point subdivision in 1912.

The historic stone gates at the corner of Jane Street and Baby Point Road mark the entrance to this exclusive west end neighborhood. Baby Point is situated on a peninsula of land overlooking the Humber River. It is surrounded by a ravine and parkland and is one of the prettiest settings in Toronto.

Baby Point’s huge estates boast a price tag to match, which sways the area’s average price to the high side. Further north and east of this posh pocket, single family detached homes still come at a premium when compared to Toronto’s average housing values.

Baby Point homes are among the prettiest in Toronto. These homes were built mostly in the 1920s and 1930s. They include Edwardian, Craftsman style, Tudor, Georgian, and English Cottage style homes. The homes that ring around Baby Point Crescent are among the largest in west-end Toronto. Many of these homes back onto the Humber River valley lands.

The social and recreational center of this neighborhood is the Baby Point Club, located off of Baby Point Road. This private neighborhood club features two tennis courts, lawn bowling, and a log cabin clubhouse that hosts various social events throughout the year. Baby Point is also an excellent place for exercise walks, jogging, and cycling. Its picturesque, winding streets and hilly terrain provide a good challenge for fitness enthusiasts. Baby Point residents can walk to Etienne BržlŽ Park which has a paved trail that follows the course of the Humber River. This multi-purpose trail is ideal for walking, jogging, cycling, and cross-country skiing. This park is also popular for fishing and picnics. Across the street from the park is the Old Mill Tennis Club which includes four public tennis courts.

The Humber theatre located on the south side of Bloor Street, west of Jane Street is a popular venue for moviegoers as this theatre screens current Hollywood releases. Without a doubt, one of the prettiest settings in Toronto has to be at the Humber River as it flows alongside Etienne Brule Park just below the historic Old Mill Inn and Spa. This is the setting every fall around Thanksgiving for dozens of anglers. These fishing enthusiasts wade with their leg-high rubber boots into the chilly waters of the Humber River to test their mettle against the teeming amount of Salmon swimming upstream to spawning grounds.

Fishermen are not the only ones who gather here on a nice fall day. Curious onlookers also line the banks of the Humber River to marvel at this spectacle; as hundreds of Salmon attempt to jump the weir in the Humber River. These schools of Salmon travel this route each fall as they make their way up the river from the mouth of Lake Ontario to spawn upstream in the Humber River headwaters which originate all the way up in the Oak Ridges Moraine. This is not a recent discovery as far as fishing holes go. Salmon have been migrating along the river for thousands of years. The First Nations people fished here long before the settlement of Toronto. The Humber River was officially designated a Canadian Heritage River at a plaque unveiling ceremony in Toronto on September 24, 1999.

The beautiful Old Mill bridge, built in 1916, is the perfect backdrop for all fishing enthusiasts. A short stroll from the bridge is the Old Mill Inn and Spa. This historic Inn has a very popular Sunday brunch and family dinner buffet, as well as a famous Thanksgiving Buffet. Good to know just in case you get hungry after a busy day watching the Salmon run. If you prefer a more casual outing, Etienne Brule Park has numerous picnic benches. This park is a short stroll from the Old Mill subway station. If you are traveling by car there is plenty of parking available at the entrance to the park.

Baby Point residents can take the Jane Street bus to the Jane station on the Bloor-Danforth subway line or may walk to the station which is about fifteen minutes from the Baby Point gates. Motorists enjoy quick and easy access to Lake Shore Boulevard and the Gardiner Expressway via the South Kingsway. Lake Shore Boulevard whisks motorists to Toronto’s Harbourfront and financial district as well as providing links to all of the major highways leading in and out of the city.

“Humberside is a non-semestered school which offers a challenging program and is committed to assisting students to become responsible, capable and caring citizens with a lifelong curiosity for learning and a desire for excellence. Established in 1892, Humberside Collegiate Institute’s architecturally significant building sits in one of the most beautiful settings in the T.D.S.B. Just as Humberside has had strong foundations in the High Park community so too are the foundations that we provide in academic excellence and tradition.” As originally published by Humberside Collegiate Institute

“Warren Park Junior Public School was built in 1930. It was named after John “Josh” Warren who served as a Trustee for the York Township Board of Education starting in 1926. In September 1971, two rooms in the old section of the school were taken over for the newly created Warren Park Outdoor Education Centre. In the summer of 2009, Macaulay Child Development Centres opened a school age daycare in the building. The strong support of our families through their participation and assistance at all of our school events makes Warren Park JPS a great place to learn and grow. Being a small school allows us to work smarter as a team for your child.” As originally published by Warren Park Junior Public School

“Lambton-Kingsway has enjoyed a long-standing tradition of community involvement and educational excellence. The newly constructed building (1993) is the fourth school to be located in this community since the village of Lambton was founded. Dating back to 1845, Lambton Mills Public School was Etobicoke’s first two-room school. By 1875 a one-room, red-brick school was built at the corner of Lambton Road (now Prince Edward Drive) and Government Road. Increasing enrolment resulted in the construction of a four-room school adjacent to the old school in 1916. The new Lambton-Kingsway Junior Middle School opened its doors to 551 enthusiastic learners on January 4, 1993.” As originally published by Lambton-Kingsway Junior Middle School

“Humbercrest Public School is located in the Jane/Dundas/Annette area and was established in 1915. We are a STEM-focused, dual track school offering both our regular English and French Immersion programmes from Kindergarten to Grade 8. Our students from Junior Kindergarten to Grade 6 live in the immediate area. Students from King George and Warren Park join us for Grade 7 and 8. Presently we serve a student population of approximately 740 JK to Gr. 8 students. We believe a strong partnership between school and home is a key to providing our students with the best environment to achieve success.” As originally published by Humbercrest Public School

“Runnymede Jr. & Sr. Public School is located in Bloor West Village, north of Bloor Street, west of High Park. The school was first founded in 1913 as a one-room schoolhouse and presently has approximately 1,100 students. Runnymede is a dual track school offering both regular English and French Immersion programs from Kindergarten to Grade 8 . We are known for academic excellence and rigour. In addition, we have a very strong Performing Arts programs including Band, Drama, and Strings.” As originally published by Runnymede Junior and Senior Public School

“Runnymede Collegiate Institute is proud of its culturally diverse community where rights, respect and responsibility are valued and where learning and teaching in a safe environment are top priorities. We have 90 years of tradition in both academic and athletic excellence with clear expectations for students in the areas of attendance, performance and achievement. A population of around 700 students makes Runnymede an optimum size to provide recognition for individual merit and yet offer a wide array of co-curricular activities. With a variety of course offerings from computer technology to co-operative education, from modern languages to music, Runnymede meets the needs and interests of its diverse student population.” As originally published by Runnymede Collegiate Institute

“Through a balanced curriculum based on sound academics, the arts and co-curricular activities Josyf Cardinal Slipyj Catholic School operates under the direction of the Toronto Catholic District School Board. In a Catholic environment enriched by our Eastern Rite traditions, a wide variety of programs and opportunities meet the diversified needs of our student population.” As originally published by Josyf Cardinal Slipyj Catholic School