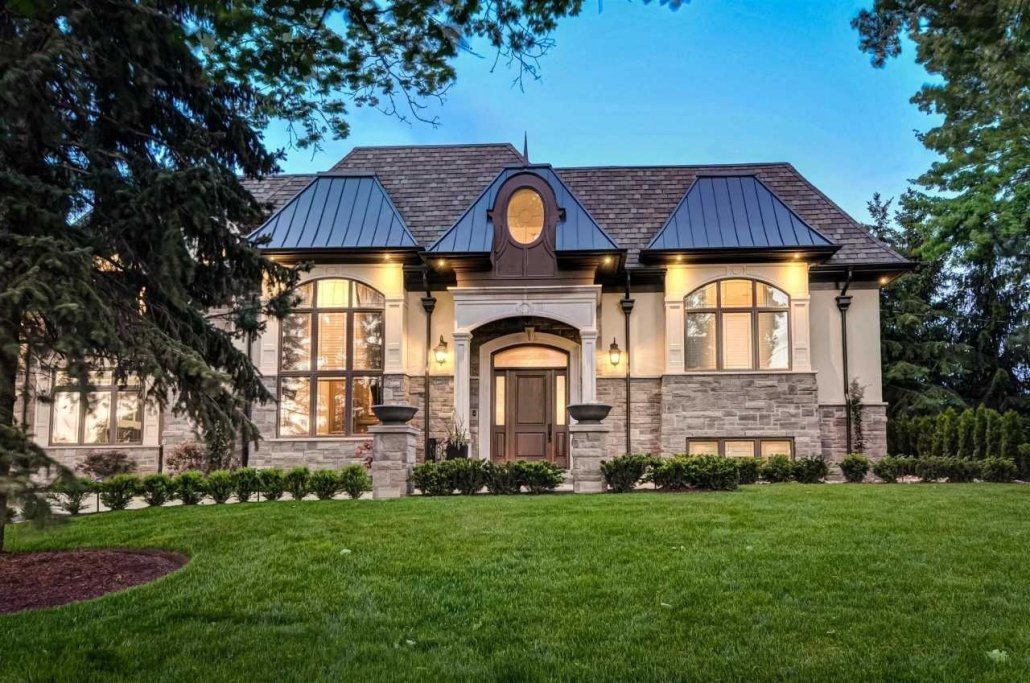 Its boundaries are the Humber River, Royal York Road, St. Philips Road, and Eglinton Avenue. Humber Heights refers to the north part of the neighborhood, while south of the Humber Creek is usually called Westmount.

Similar to many of Toronto’s neighborhoods, the development of this one began thanks to the Humber River.

The area now known as Humber Heights was originally part of the Village of Weston. This hamlet was located along the west bank of the Humber River and revolved around a grist mill, a saw mill, and a distillery. In 1852, this settlement was washed away by a torrential spring rain which saw the water level of the Humber River rise by about twenty feet. Only St. Philips Church and Cemetery, remain from this early settlement.

In the following decades, the mills in the area were bought and sold multiple times. Eventually, brothers Charles and William Wadsworth purchased them in 1828.

The Wadsworth milling empire would continue to grow for over 80 years. The popularity of these mills turned the area into Upper Canada’s major milling center.

In the early 1800s, John Scarlett and his family were also purchasing timberland along the Humber River. John’s three sons eventually lived by the river near Eglinton Avenue West. The private road which connected all of their properties is now named Scarlett Road to pay tribute to the family.

Humber Heights next established itself as a farming community centred along Scarlett Road. These farms began to be subdivided during World War I in order to provide housing for the workers at the nearby munitions factories in Weston. A housing boom after the war resulted in the further urbanization of this community.

In 1921 the Humber Heights Consolidated School was opened and it soon became the focal point of this neighborhood. Humber Heights school is still standing today at 2245 Lawrence Avenue West where it is now operated by the Toronto School Board as a resource center and adult education center.

In October of 1954, Hurricane Hazel hit Toronto and had a devastating impact on the Humber Heights-Westmount neighborhood.

According to the Etobicoke Historical Society, “14 homes were lifted off their foundations and floated away. Thirty-two lives were lost.”

One of the worst-hit places was Raymore Drive, near Lawrence Avenue West and Scarlett Road. Mainly due to its close proximity to the Humber River, the street was almost wiped out.

In total, the devastating natural disaster took the lives of 81 Canadians.

Amongst those were 40 percent of the members of St. Matthias Church, which was built in 1922 at 691 Scarlett Road.

Now the building is a Sukyo Mahikari Centre, and in 2003 the City of Toronto designated it as being of cultural interest or value.

Much like the former church, the Humber Heights-Westmount neighborhood continues to grow and evolve, while paying tribute to its extensive history.

Humber Heights is set in the enchanted Humber River Valley with its gently rolling hills and abundance of mature trees. Humber Creek, a tributary of the Humber River, winds its way through the centre of this neighbourhood. This small creek flows in a southeasterly course from Sun Row Park at Islington Avenue into the Humber River. The pedestrian bridge on Royal York Road across from the shopping plaza offers a picturesque view of the creek and the surrounding ravine valley.

Today, there are multiple schools in the area, in both the Public and Catholic districts. Founded in 1975, St. Demetrius Catholic Elementary School on La Rose Avenue is one of only three Ukrainian Catholic Schools within the TCDSB.

Notably, Humber Heights-Westmount has a large Ukrainian community. According to the City of Toronto’s 2016 Neighbourhood Profile, Ukrainian was the top non-English language spoken at home.

Along with the school, the neighborhood is home to a Ukrainian Care Centre, Byzantine Ukrainian Catholic Church, and senior residence.

The neighborhood is also home to many Italian families, with Italian beating Ukrainian for top non-English mother tongue language in the 2016 Neighbourhood Profile.

Like many Toronto neighbourhoods, the end of WWII sparked a surge in development. More people began moving into the area, especially immigrants from Italy and eastern Europe. This created demand for more homes and facilities to be built.

In the 1940s, Tudor style homes became popular, and you can still spot some of them in the neighborhood today.

Humber Heights has a very diverse mix of houses ranging from the impressive mansions on Yorkleigh Avenue and Westmount Park to the bungalow and split-level houses that are found scattered throughout this neighbourhood.

The residential pocket east of Scarlett Road contains quaint Victorian cottages from the early 1900s, Edwardian style houses from the 1910s and ’20s, Tudor designed homes from the ’30s and ’40s, and story-and-a-half houses from the 1950s. The Scarlettwood apartment and townhouse complex, owned by Metro Toronto Housing, is located in this section of the neighborhood at the top of the valley.

There is a large neighborhood shopping plaza located at 1500 Royal York Road. This plaza includes a supermarket, a bike and ski shop, fashion stores, dry cleaners, a drug store, a bakery and deli, a dollar store, a travel agency, an indoor children’s playground, a billiard hall, and a bowling alley.

Dixon Road has a small cluster of retail stores that serve the everyday needs of this community. Included in this mix are a Somalian meat and grocery store and a Somalian clothing boutique.

Humber Heights residents are conveniently located near the Humber River Valley nature and recreational trail. Access to this trail is available off Raymore Drive which leads into Raymore Park. A plaque in Raymore Park serves as a memorial to the thirty-two Raymore Drive residents who were victims of Hurricane Hazel’s wrath in 1954 when fourteen homes were swept down a raging Humber River.

Riverlea Park, located at 919 Scarlett Road, is home to the Riverlea Italian Seniors Club, the Elm Jr. and Sr. Club, and the only greenhouse allotment gardens in Toronto. This allotment garden operates from October to May. It is a private facility run by the city which rents out greenhouse space to non-commercial applicants on a first come first serve basis.

Motorists are approximately five minutes from the Highway 401 on-ramp, north of Dixon Road off Islington Avenue.

“Kipling Collegiate Institute (KCI) is a small school with a strong academic focus that is enhanced by our unique Science, Technology, Engineering & Math program. STEM is embedded across the curriculum. At Kipling, we believe in nurturing the needs of the whole learner. We offer an excellent academic program integrated with modern technology, active community service and a wide range of clubs and activities. We are a small, multicultural community school prioritizing respect, dignity and understanding for each individual and the community as a whole.“ As originally published by Kipling Collegiate Institute

“Established in 1857, Weston Collegiate holds the distinction of being the second-oldest secondary school in Toronto and in 2007 celebrated its 150th anniversary. Once positioned in the heart of what was the quaint but industrious town of Weston, today, Weston is home to the world, with current students representing 80 countries. As a result, Weston is international in focus and spirit. We strive to meet the needs of all students in our community by offering courses at the academic, applied and locally developed level. We prepare students for university and college admissions, as well as offer programs in the skilled trades that lead to work or apprenticeship.” As originally published by Weston Collegiate Institute

“Westmount Junior School celebrated its 50th year of existence in 2010, with a large community funfair. It has 370 students and 22 teachers, including Special Education, Reading Recovery, Music and Media Literacy. We now have 4 Full Day Kindergartens. Teacher grade teams plan together and use common tools to assist in shared assessment and planning. Professional Learning Communities (PLCs) develop Teaching and Learning Critical Pathways. Students are challenged to focus on higher-order thinking skills and the big ideas in literature as well as far-reaching mathematical concepts.” As originally published by Westmount Junior School

“Valleyfield Junior School was granted its name because of our beautiful site; a combination of a large open field and a pleasant valley. The school opened in 1959 and was joined by Green Meadows and Fairhaven Junior Schools in 1978 and in 1984 respectively. We currently have 30 teaching and support staff who are dedicated to challenging each individual student to achieve high levels of academic achievement and personal success. At Valleyfield Junior School, we create a safe, secure and welcoming environment in which our children will develop leadership skills and feel empowered to be active global junior citizens.” As originally published by Valleyfield Junior School

“Hilltop Middle School, founded in 1958, is located in a residential neighborhood in the Royal York and Westway area. It is a dual-track school, offering both English and French Immersion instruction. Approximately 500 students, rich in cultural and socio-economic diversity, attend Hilltop. The French Immersion program draws students from the entire West End of Toronto. Student academic success is our goal. We provide opportunities for students to achieve their maximum capacity and together with parents, we work to foster each child’s success.” As originally published by Hilltop Middle School

“H.J. Alexander Community School is located in the community of Weston on the corner of King Street and George Street. The original school was built in 1892. It was replaced by a new building in 1958. The third school on the original site was officially opened in September 1995. In addition to our regular programs from JK to Grade 5, we offer English as a Second Language and a Home School Special Education Program. Approximately 740 children contribute to a learning environment that is rich with an exciting diversity of languages and cultures.” As originally published by H. J. Alexander Community School

“All Saints Catholic Elementary School is committed to Catholic education as outlined in the Mission Statement of the Toronto Catholic District School Board. With Catholic faith as our common bond, we focus on our students who come to us with a variety of strengths and needs. Our prayer life, liturgical celebrations, the sacraments, and our faith and values system form the foundation of our programs.” As originally published by All Saints Catholic School

“Our school’s mission is to offer our students a rich spiritual, academic and cultural formation in the light of the Gospel values, challenging them to achieve excellence in a stimulating, culturally rich, community-based and welcoming environment. Together with the Catholic School Advisory Council, the School strives to provide our students with the most current educational and technological resources available to us through the Ministry of Education and the School Board to enhance their learning opportunities.” As originally published by St. Demetrius Catholic School

“St. Eugene School community, formed by Catholic beliefs and traditions, strives to help individual learners to achieve their highest potential in intellectual, emotional, social, moral, cultural and physical development. The students are provided with a challenging, safe and enjoyable learning environment in which diversity and achievement are respected and celebrated within a school community rooted in the teachings of Jesus Christ. To meet the diverse needs, abilities, and interests of our students, a variety of programs and services are available at St. Eugene: core French classes, vocal music, instrumental music, and both general and intensive special education classes.” As originally published by St. Eugene Catholic School