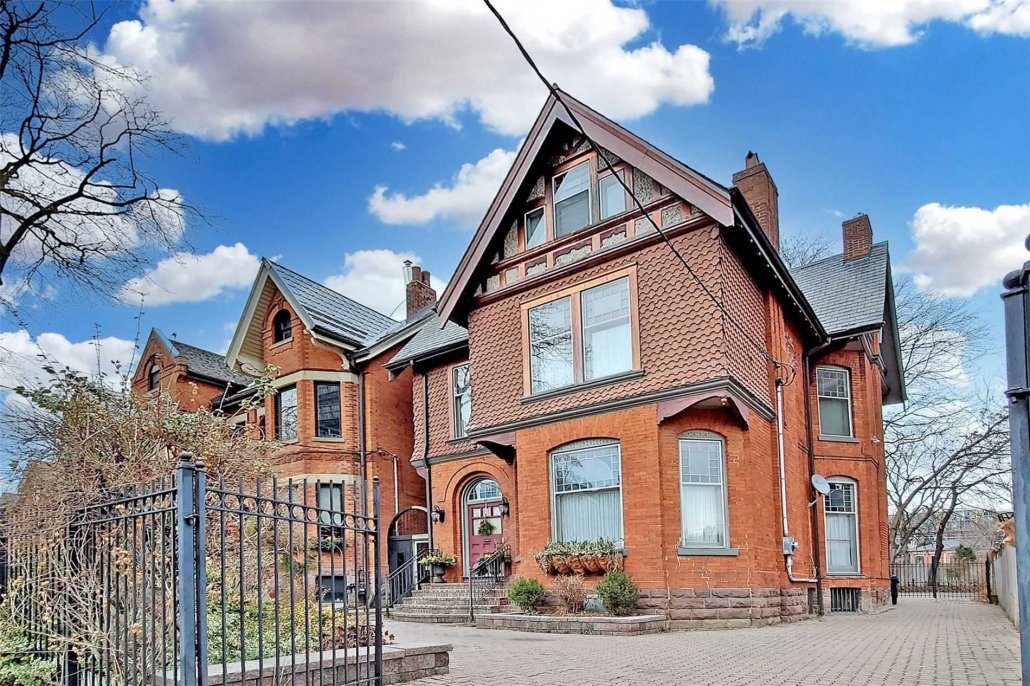 The Moss Park neighborhood was originally part of a 100 acre Park Lot owned by William Allan, one of early Toronto’s wealthiest citizens. In 1830, Allan built a huge mansion on his estate and named it Moss Park. The mansion stood where the city park of the same name is today.

When Allan passed away in 1853, he left his Moss Park estate to his son George, who would later become the Mayor of Toronto. George Allan immediately subdivided his father’s estate and this area soon became known for its Victorian homes.

Today, little is left of the original Moss Park Toronto Real Estate neighborhood. Its houses were demolished in 1962 in order to make room for the Moss Park Apartment Buildings which comprise the current Moss Park neighborhood.

Moss Park Toronto Real Estate is one of Toronto’s largest public housing projects. The Salvation Army Hostel is located across the street from Moss Park at the corner of Sherbourne and Queen Street.

The Moss Park Toronto Real Estate neighborhood is anchored on the west side by a large public park which also happens to be the home of the Moss Park Armoury, a training center for the Canadian Armed Forces.

The Moss Park apartment buildings contain their own recreation center, as well as an outdoor basketball court, and children’s playgrounds.

Moss Park situated to the west of the neighborhood apartment buildings Ü is one of Toronto’s larger parks. It includes a sports field, a baseball diamond, and two tennis courts. Moss Park is located right next to the John Innes Community Recreation Centre. This modern recreational facility features an indoor swimming pool, a gymnasium, a running track, a weight room, a cardio training room, a games room, a woodworking shop, and a craft room. Next door to the community center is the Moss Park Arena.

There are a number of public transportation routes within the Moss Park neighborhood, including the Queen Streetcar, and bus service on Sherbourne Street and Parliament Street. These surface routes connect to stations on the Bloor-Danforth and the Yonge-University-Spadina subway lines.

“Founded in 1807, Jarvis C.I. is the first public high school in Toronto and has a long tradition of academic excellence and student involvement. Jarvis is committed to providing a rich and varied program encouraging higher order thinking as well as research and communication skills. Over 90% of our graduates attend university, including top schools like U of T, Waterloo, Dalhousie and Queens. Over 53% of graduates are Ontario Scholars and 60% receive scholarships / bursaries. Situated in the ‘heart of the city’ at Jarvis and Wellesley, our school has a rich mix of students from over 100 countries of origin, integrated into one unified, vibrant community in which diversity is our strength!” As originally published by Jarvis Collegiate Institute

“Nelson Mandela Park Public School is an inner city school offering JK to Grade 8 programs. We are located in the heart of Regent Park in a recently rebuilt state of the art building that is bright, beautiful, and filled with lots of amazing spaces for learning. We have a student body of just over 500 students that is incredibly diverse with over 30 different home languages represented at our school. Nelson Mandela Park PS has a dedicated staff who work their utmost to serve the needs of our school community. We are focussed on building a “Culture of Caring” at our school that addresses the social and emotional well-being of students, but also extends to caring about ensuring high quality teaching and learning for all of our students.” As originally published by Nelson Mandela Park Public School

“Lord Dufferin P.S. is a downtown inner-city school serving families in the Regent Park community. The old building was built in the 1920’s with additions in the late 1940’s. A new school building was completed in January, 2000. In the fall of 2003, the school yard was landscaped with the addition of a baseball diamond, soccer field, walkway to Berkeley Street and new fencing. In May, 2008, a new play structure was donated and built by the Kids Around the World Organization and the Million Dollar Round Table Foundation.” As originally published by Lord Dufferin Junior and Senior Public School

“Market Lane Public School is a relatively new school (1992) located on The Esplanade in the St. Lawrence Community, a mixed social and economic community that is still undergoing development. The school is housed in a building complex which includes a community recreation centre and apartment dwellings.” As originally published by Market Lane Junior and Senior Public School

“Jesse Ketchum Public School is located at Bay Street and Davenport Road near Yorkville Village. The school was established around 1831 and the present building dates from 1914. The school is named after Jesse Ketchum, a philanthropist who donated the land to the School Board to build the school and to the city for the park. The school serves a diverse population of approximately 400 students, whose cultural backgrounds represent many countries from around the world. There are more than 40 different languages spoken in the homes of our students. At Jesse Ketchum our students build self-esteem and confidence, learn to work together in mutual respect and trust, and value diversity.” As originally published by Jesse Ketchum Junior and Senior Public School

“Liberty Prep is a one-of-a-kind institution that brings Maria Montessori’s century-old teaching philosophy to Toronto’s downtown core. We believe that the environment children learn in is as important as the materials they use, so we handpicked and renovated two truly unique locations that reflect the character of our downtown Toronto neighbourhoods. Liberty Prep brings the proven Montessori method to the urban Toronto core, filling the gap between traditional education and the skill set necessary to succeed.” As originally published by Liberty Prep School Corktown Campus

“TAIE International Institute is an independent international days and boarding high school specialized in university preparation. TAIE is located at the heart of Toronto, one of the most vibrant and facinating cities in Canada. As an independent school in Canada, TAIE is able to provide programs and services that 100% tailored to the needs of every international students and these programs and services are usually not available from most public high schools in Toronto. As a result, TAIE students are able to complete their program at their own scheduled pace, students can even complete their University Preparation in as soon as six months. We take pride in the fact that over that past few years we have successfully helped many TAIE graduates in gaining admittance with scholarships to such prestigious universities as the University of Toronto, the University of Western Ontario, York University, McMaster University, the University of Alberta, and many other Universities across Canada and overseas.” As originally published by TAIE International Institute

Our Lady of Lourdes Catholic School

“The learning community of Our Lady of Lourdes thoughtfully maintains a safe and caring environment wherein all students develop their learning potential. Literacy and numeracy skills are a central focus as are faith development, the arts, social justice and athletics. Together, all of these aid in developing the character attributes that are the hallmark of caring and creative citizens.” As originally published by Our Lady of Lourdes Catholic School

“Our mission is to ensure that all our students are valued equally and their unique strengths and needs are recognized and met.“ As originally published by St. Paul Catholic School

“All of our students are treasured gifts from God. In order for our children to be successful we believe we must have the highest expectations of our students and acknowledge and provide for all possible learning styles. We aim to work together to ensure that our school provides every individual with a safe, positive, welcoming learning environment. We believe that the development of good interpersonal relationships and a positive classroom atmosphere conducive to learning will promote good behaviour. The key to the success of the students of St. Michael’s is the emphasis on learning goals, co-created success criteria and practical and timely descriptive feedback. These clear supports provided by all the teachers to all the children help to provide a basis for evaluating student achievement and program effectiveness.” As originally published by St. Michael Catholic School