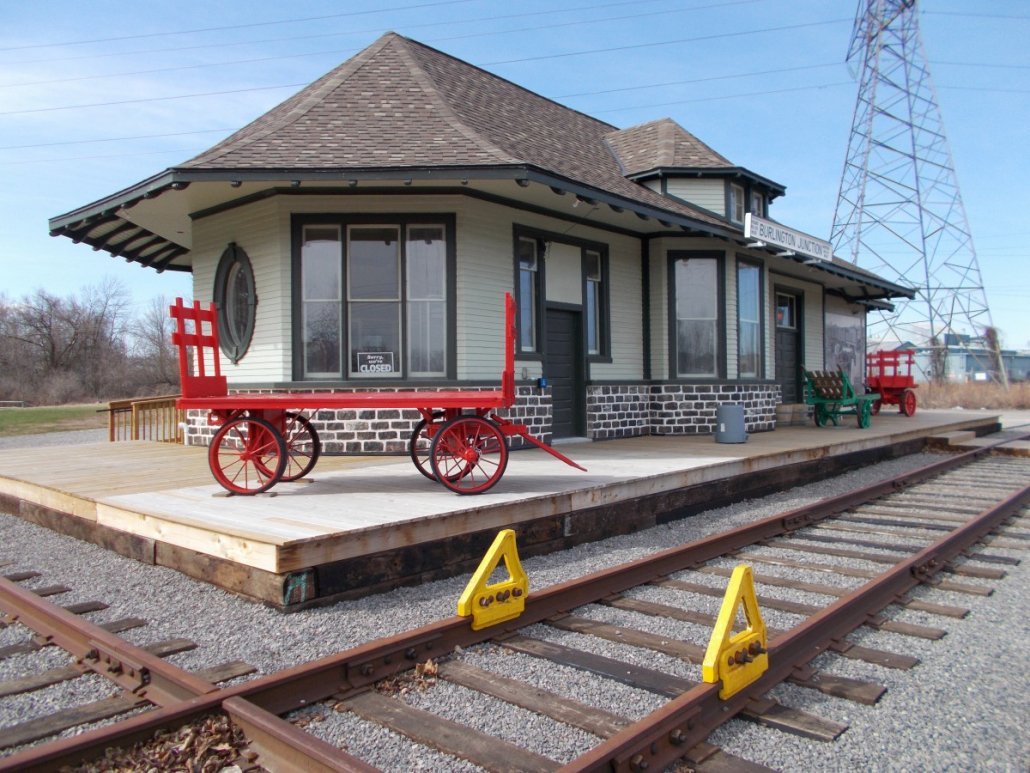 The village of Freeman was named after Joshua Freeman. In 1816, he came to Upper Canada from Nova Scotia. The Freemans were farmers but also operated a toll road along part of the road from Hamilton to Toronto. By the turn of the century, Freeman included a railway station. Freeman Station is one of the last surviving Grand Trunk Railway stations, following the loss of the Aldershot GTR station. It’s “the Freeman Station,” after the hamlet in which it stood, but officially the railway signed it variously as the “Burlington Junction” or “Burlington West” Station.

The Burlington Junction Station was the hub of Freeman community life for almost 100 years.  The personal and commercial comings and goings of the community were centered there — the crisscross of railway lines brought goods and people to the area, and they were the primary mode of shipping goods, especially livestock and produce, to world markets.

From 1854 to 1988 the Burlington Junction Station was Burlington’s railway arrival and departure center in the hamlet of Freeman, Ontario. Passenger trains connected residents of Wellington Square, later Burlington, directly with Toronto, Chicago, and New York. The predominance of automotive routes reduced passenger train traffic from the 1950s on. Commuter travel was also transformed by the launch of the Government of Ontario (GO) transit system in 1967.

Freeman neighborhood has 2 parks and community recreation facilities within its boundaries, with 1 rail transit stop and 32 street-level transit stops in the neighborhood, it’s easy to get around. This neighborhood has many shops, services, and amenities to make your daily errands easy. Here are also shopping options, restaurants, and notable places in the area; 1 Fortinos and 10 other grocery stores, 4 Starbucks and 10 other coffee shops, 2 Shoppers Drug Mart and 13 other pharmacies, 1 GoodLife Fitness, and 11 other gyms.

“Burlington Central is proud of the rich, diverse programming we offer our school community. The current school building was constructed in 1922 and has been added to extensively over the years. The last major addition was made in 1965, which added a new technical wing and gymnasiums.” As originally published by Burlington Central School

“Assumption Catholic Secondary School is a faith-centered learning community that fosters excellence within the individual, promoting academics and citizenship through the living of Christian values. Assumption Catholic Secondary School, together with home, church, and community, values the uniqueness of each person and is dedicated to lifelong learning, personal development, and spiritual growth.” As originally published by Assumption CSS

“With Mary as our role model, Notre Dame Catholic Secondary School enshrines the tenet of human dignity in treating everyone as a reflection of God among us by encouraging respect and compassion to ensure all will reach his or her full potential.” As originally published by Notre Dame CSS

“The St. Paul Catholic School community provides a responsive learning environment where our faith, the family, and individuality are respected and valued. We are a school where our young citizens develop and demonstrate self-worth, appreciation for others, a lifelong love of learning, and the ability to contribute productively to society.​​” As originally published by St Paul Catholic ES

“The Missing Links Academy brings a hybrid approach to teaching, bridging the gap between classical education and curriculum content with behavior and socialization goals. Our Ontario Certified Teachers work closely with our ABA trained staff to create a supportive, clinically proven, learning environment, and approach for students on the ASD spectrum. We explore the Ontario School Curriculum with hands-on, innovative approaches, to encourage student investment and social skills development.” As originally published by Missing Links Academy