Forest Hill North Toronto Real Estate is one of the Prestigious neighborhoods in Toronto.

The Forest Hill North Toronto Real Estate is one of Toronto’s most prestigious districts. The mansions in Lower Forest Hill are rivaled only by those found in Rosedale. Forest Hill’s schools are among the best in the country. They include two of Canada’s most revered private schools: Upper Canada College for boys, and Bishop Strachan School for girls. Forest Hill is one of Toronto’s prettier districts. Its topography is very diverse with gently sloping hills, winding roads, and numerous little parkettes all adding charm to the neighborhood.

Forest Hill is a neighborhood of mixed ages and stages. There are lots of couples, both with and without children, as well as retirees whose children have left home. There is a fairly strong Jewish presence in the area. This is also an affluent area, with 42% of residents taking home an income of over $80,000 after tax.

Forest Hill was incorporated as a village in 1923. It was named after the summer residence of John Wickson, built in 1860, at the junction of Eglinton Avenue and Old Forest Hill Road. The hill is still there, but the forest is long since gone, having been replaced by apartment buildings. Prior to its incorporation, Forest Hill had been known as “Spadina Heights”. Spadina is a derivative of the First Nations word “Ishapadenah”, which means a hill or sudden rise inland. The boundaries of the present-day neighborhood are shaped by the old Spadina Heights school district. “Lower Forest Hill”, south of Eglinton, was completely developed by the 1930s. “Upper Forest Hill” was slower to develop due to the fact it had previously been occupied by the old Belt Line railway, and then by industry. In 1967, Forest Hill Village joined Swansea Village as one of the last two independent villages to be annexed by the City of Toronto. 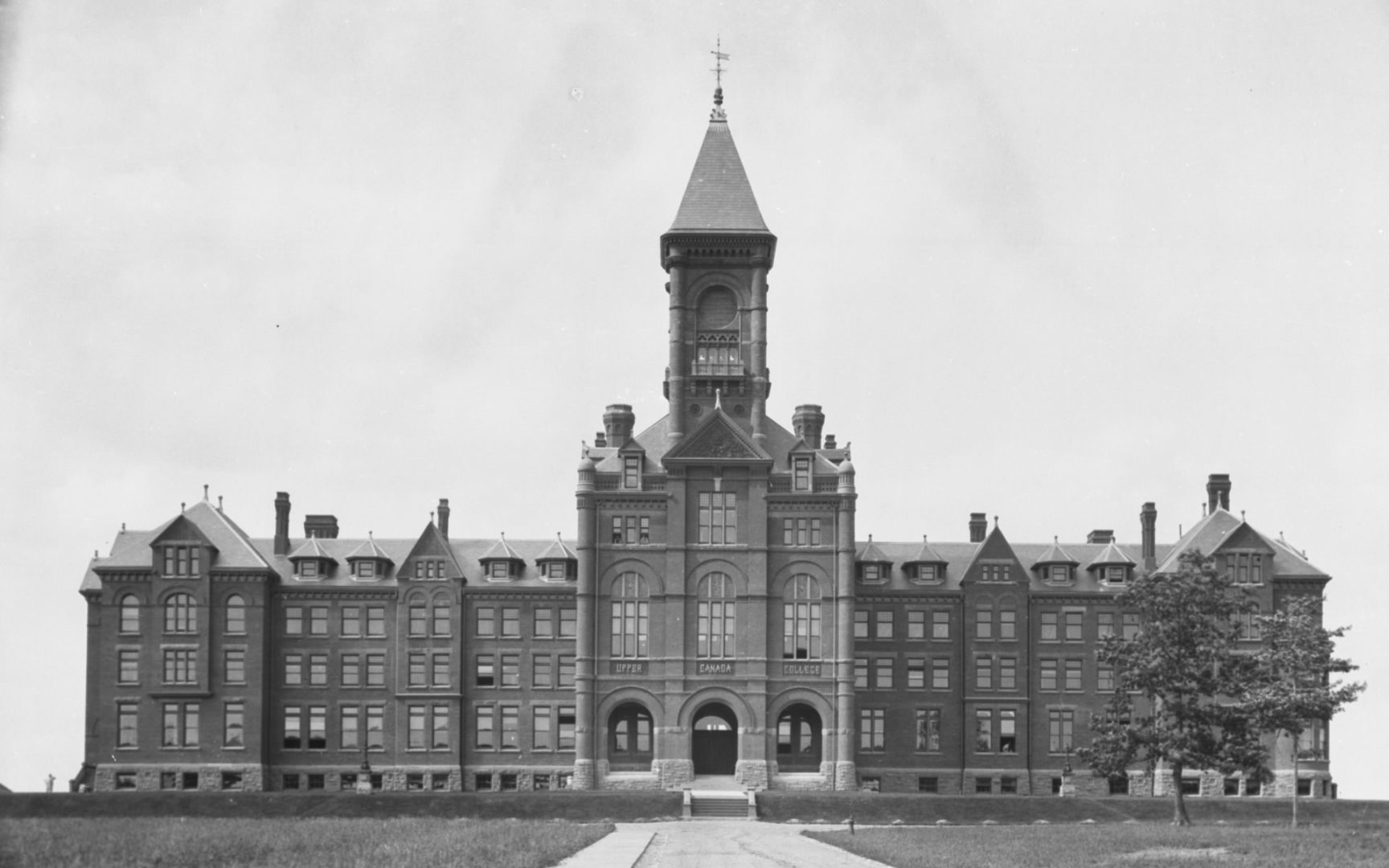 Prior to its incorporation, Forest Hill had been known as “Spadina Heights”. Spadina is a derivative of the First Nations word “Ishapadenah”, which means a hill or sudden rise inland. The boundaries of the present-day neighborhood are shaped by the old Spadina Heights school district. “Lower Forest Hill”, south of Eglinton, was completely developed by the 1930s. “Upper Forest Hill” was slower to develop due to the fact it had previously been occupied by the old Belt Line railway, and then by industry. In 1967, Forest Hill Village joined Swansea Village as one of the last two independent villages to be annexed by the City of Toronto.

Forest Hill is a quiet residential neighborhood filled mostly with large detached houses. The Forest Hill North Toronto Real Estate offers most of the shopping and other action takes place in Forest Hill Village. Many of the shops in Forest Hill are high-end boutiques that cater to the area’s affluent population. The parks and excellent schools make the area attractive to families.

Forest Hill North Toronto Real Estate is a quiet, kid-friendly, and high-end neighborhood. The schools in the area include some of the most prestigious in the city, and there are some lovely parks as well as access to the Beltline trail and Cedarvale Ravine. The small shopping hub of Forest Hill Village has the atmosphere of a small town rather than a big city.

The Forest Hill Village shopping district is centered around the intersection of Spadina Road and Lonsdale Road. The ambiance of this private enclave of stores is that of a small town rather than a big city. The Village’s boutiques and shops cater to the specific needs of Forest Hill’s affluent residents. The Eglinton West Village shopping district has a large variety of stores to suit every taste and budget. This street also contains many fine restaurants and food stores.

Forest Hill is a safe and quiet neighborhood with some great, kid-friendly parks. The houses are beautiful and it’s a wonderful area to go for a stroll. It’s also a very expensive area, and although there’s some great shopping in Forest Hill Village and along Eglinton, there’s not a huge variety of stores.

The Belt Line fitness and nature trail follows the route of the former Belt Line railway, which was Toronto’s first commuter train. This fourteen and one-half kilometer track passes through Forest Hill on its way down to Rosedale. The Belt Line Path is enjoyed by both nature and fitness enthusiasts.

Forest Hill is a family-friendly area, and it contains several schools including the prestigious Bishop Straughn School for girls and Upper Canada College for boys. The Beltline trail, a lovely walking and cycling trail, cuts across one corner of the neighborhood, and there are plenty of parks and green spaces. The Temmy Latner Forest Hill Jewish Centre is in Forest Hill Village.

Forest Hill is conveniently located within walking distance of numerous bus routes that connect passengers to Toronto’s rapid transit subway lines. For motorists commuting in and out of the city, the Allen Expressway is easily accessed from Eglinton Avenue West. Forest Hill’s Public Library has a myriad of programs for adults, children, and preschoolers.

Flemingdon Park has 12 Public schools, 8 Catholic schools, in this neighborhood, your kids can get a great education.

“The original school, located in the Forest Hill community, was built in 1941. Over the years there have been many changes, additions, and renovations to keep this school current. The school presents a welcoming environment and works hard at positive partnerships to enhance student learning. West Preparatory has more than 540 students, one-third of whom have been in Canada for less than seven years. The students represent 45 different countries of origin and 25 different linguistic groups.” As originally published by West Preparatory Junior Public School

“Allenby is situated in the Lawrence Park community. Its documented history dates back to the 1400s when a tribe of Huron Iroquois erected a longhouse village on the site. Modern-day development in the area led to the Toronto Board of Education decided in 1926 to build a school. The school was named for Lord Edmund Allenby, one of Britain’s foremost soldiers. Opened in 1931, Allenby was renovated and enlarged in 1972 and again in 1994.” As originally published by Allenby Junior Public School

“Forest Hill Jr. & Sr. Public School (JK-8) is a community school located in the Forest Hill neighborhood which, prior to 1967, was part of the old Forest Hill Village. The school consists of two separate buildings, one of which was built in 1923, the other in 1938. Forest Hill has the unique features of period architecture, a 470-seat auditorium with a proper stage, and spacious grounds. The grounds include two separate baseball diamonds, soccer fields, and a full running track.” As originally published by Forest Hill Junior and Senior Public School

“Forest Hill C.I. is very much a ‘first choice school.’ Our students choose Forest Hill for its strong academic reputation. We are a small school with a family atmosphere, offering outstanding facilities and supportive programs. Our teachers partner with you to ensure you achieve your potential. Our motto is ‘Not for Ourselves Alone.’ Our students are involved in fundraising activities throughout the year and have received many citations for their efforts. Our system provides opportunities for broader leadership skills development. We offer an extensive co-curricular program in theatre and music productions, athletics, and a variety of clubs for personal and academic growth.” As originally published by Forest Hill Collegiate Institute

“Glenview Senior Public School opened its doors in 1966 and is located at Avenue Road and Lawrence Ave. It is a triple-track school (English, French Immersion, Extended French) with approximately 745 grade 7 & 8 students. Technology is an integral part of learning and allows our students to acquire the necessary skills to become 21st-century learners. Glenview offers Special Education programs that include Resource Support and Home School Program. Students are engaged in a variety of general arts and technology programs (Band, Strings, General Music, Visual Arts, Dance, Drama, Family Studies, Design & Technology). We also excel in providing an exceptional physical education program that includes Aquatics and many sports teams.” As originally published by Glenview Senior Public School

“North Preparatory Junior P.S. is a vibrant, community school where parents enthusiastically support their children in a school that demands hard work, initiative, and responsibility for self and others. We value risk-taking and a positive attitude in our students. Students are expected to strive to achieve their best. We know that all children have different strengths, abilities, needs, and interests, and our dedicated, highly motivated staff will help the students develop their self-confidence through a variety of curricular and extracurricular activities.” As originally published by North Preparatory Junior Public School

“North Toronto C.I. is located near Yonge and Eglinton where it has proudly served the community since 1912. Our school is held in high regard by its graduates and by the community. An important aspect of the school is North Toronto’s well-established reputation as a very strong academic institution. Over 90% of our graduates gain admission to some of the finest and most competitive university programs in the world. Our graduates continually tell us that the rigor and high expectations expected at North Toronto have prepared them well for the future. The school is small enough so that our staff truly knows our students, yet large enough to offer a wide variety of academic courses designed to prepare students for post-secondary education.” As originally published by North Toronto Collegiate Institute

“Founded in 2001, the aim of Alive Montessori & Private School is to provide an environment where educational results can be achieved by children of all abilities and from all cultural, ethnic, and religious backgrounds. Students at Alive School develop high standards of integrity, with confidence in themselves and respect for others. We provide a friendly, caring, and safe environment where students can grow in confidence and become successful. With a wide variety of activities, we help set students on their chosen paths.” As originally published by Alive Montessori & Private School

“Torah High offers exceptional Jewish studies courses, for credit, to Jewish public high school teens. Torah High is an Ontario Ministry of Education inspected private school. We are parents, Jewish role models, educators, and community advocates who believe that Jewish learning should always be meaningful, engaging, and experiential. Torah High was built to allow our student to explore their Jewish identity with experiences that begin in the classroom and extend beyond.” As originally published by Torah High – Village Shul

“Our Lady of The Assumption School fosters students’ excellence in academics, facilitates students’ faith development, and makes every effort to provide a safe learning environment for all of its members. With a steadily growing number of students who have been enrolled, Our Lady of The Assumption School is a welcoming place that reflects our values and beliefs. We strive to provide our students with many extracurricular opportunities and exciting educational opportunities. Moreover, we are a school focused on improving student learning and achievement.” As originally published by Our Lady of the Assumption Catholic School

“As a publicly funded Catholic school, we are fortunate to be a faith filled community that partners with the parents, the home and our parish. Working together, we provide your children with a safe, engaging, learning environment. We are very fortunate at Sts. Cosmas and Damian to be active members of a Catholic, faith filled community, where we celebrate through prayer, and by nurturing the faith development of the children entrusted to us. This is a warm, nurturing school that meets the spiritual, academic and social/ emotional needs of our students. Our many specialized programs meet the individual needs of all of our students. We are especially proud of our Deaf and Hard of Hearing Program, the only such program in the Toronto Catholic District School Board.” As originally published by Sts. Cosmas and Damian Catholic School