Homes for Sale in Englemount-Lawrence, Toronto 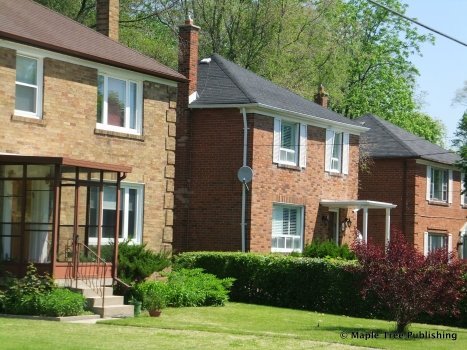 Englemount-Lawrence contains the area known as Lawrence Manor. Lawrence Manor was farmland from the early 1800s until the 1940’s when the Canada Mortgage and Housing Corporation purchased this property for residential development. CMHC serviced this entire subdivision putting in water service, sewers, and roads, before selling off individual lots to a number of small builders in the early 1950’s. The first Lawrence Manor buyers had to qualify for a CMHC mortgage. These mortgages were for 25 years at a rate of only four and a half percent! Cows were still grazing on the north-west corner of Bathurst Street and Lawrence Avenue in 1951 when the first residents began moving into this neighborhood. Lawrence Plaza was built in 1953 on the site of this former cow patch. Lawrence Plaza was the largest shopping center in Toronto when it first opened. It attracted shoppers from all over Toronto and helped put the Lawrence Manor neighborhood on the map.

The Englemount-Lawrence neighborhood, with a population of 22,100, according to the 2011 Statistics Canada data, is bounded by Hwy. 401 to the north, Allen Road to the west, Briar Hill Avenue to the south, and Bathurst Street to the east. Over the 10 years from 2001 to 2011, more residents have been listing Tagalog (Pilipino, Filipino) as their Home Language. That number has grown from 290 to 1,300 – an increase of 348 percent.
According to the 2011 census data, Tagalog is the most common non-official language in Englemount-Lawrence with 8.9 percent listing it as their Mother Tongue. Spanish and Russian are also common in this neighborhood within Ward 15 (Eglinton-Lawrence).

Lawrence Manor is a family oriented neighborhood with a predominantly Jewish Orthodox community. Bathurst Street which forms the eastern boundary of this neighborhood includes Jewish schools and cultural centers, synagogues, restaurants, and retail shops. The dominant landmark in this neighborhood is the Baycrest Centre for Geriatric Care which provides hospital and nursing home care. Baycrest is currently undergoing a major renovation and expansion of its highly regarded nursing home facilities. The character of Englemount-Lawrence is exemplified by its calm environment. There is a fair amount of greenery in this part of the city; there are about 10 parks nearby for residents to visit, such as Baycrest Park, and they are especially well-spread out, making it very easy to access them. Residents will also find that numerous tree-lined streets are prominent. This neighborhood is quiet overall, as noise from streets and other parts of the city is rarely an issue – although that is not the case around Allen Expressway or Highway 401.

Lawrence Manor’s original housing stock was built largely between 1951 and 1955. These houses include detached brick two-storey houses as well as split-level homes and bungalows. There are also some newer custom built houses in this neighbourhood. The lots in Lawrence Manor are at least thirty feet wide and all the houses have a private drive. Bathurst Street is lined with low and high-rise apartment buildings as well as a recently built luxury condominium apartment building.

The majority of the housing stock of Englemount-Lawrence is made up of small apartment buildings and large apartment buildings, while the remainder is mainly single detached homes. This neighborhood is primarily composed of one-bedroom and two-bedroom homes. Around 60% of the properties in the neighborhood are occupied by renters whereas the remainder is occupied by owners. About 30% of homes in this part of the city were constructed pre-1960, while many of the remaining buildings were built in the 1960s and the 1980s. Retail stores line much of the area on the west side of Bathurst Street. Lawrence Plaza at Bathurst and Lawrence caters to the area and opened in 1953. On the side streets west of Bathurst is mainly residential single homes and low rise apartments. The area east of Bathurst to Yonge is home to the more wealthy part of Lawrence Manor and the community is home to a number of Orthodox Jewish organizations and religious centers.

The Bathurst Street and Lawrence Avenue intersection is one of the premier Jewish shopping districts in Toronto. Included in this mix are gift shops, bookstores, kosher food shops, bakeries selling “Montreal style bagels”, delicatessens and restaurants. A handful of Chinese restaurants are also included in this retail corridor. The Bathurst Street and Wilson Avenue shopping area is centered around smaller shopping plazas. This retail district also features many stores and restaurants that cater to the local community. Lawrence Plaza, situated on the north-west corner of Bathurst Street and Lawrence Avenue is a popular shopping destination that attracts a local as well as a regional clientele. This plaza is especially well known for its many outlets and discount stores.

Parents and their children will value the proximity to schools and daycares, which are within walking distance from the majority of houses for sale in this part of Toronto. Parents are served by public and private schools at both the elementary and high school levels. With regards to food, it is typically an option for homebuyers in Englemount-Lawrence to buy general and specialty groceries by walking. In addition, a restaurant is generally just around the corner, and residents benefit from a few cafes as well. A very good choice of clothing stores can also be found within a short walking distance.

Prince Charles Park is an island of green space conveniently located right in the middle of this neighborhood. Prince Charles Park has a children’s playground that is well used by the many young children in Lawrence Manor. The ultra-modern Barbara Frum Library at 20 Covington Road features a children’s story room, French and multicultural collections, private study rooms, a meeting room, and an auditorium with a 150 person seating capacity. Combined with the library is a 10,000 square foot Recreation Centre, that contains multi-purpose rooms for use by local community groups.

This neighborhood enables house buyers to get around using several methods of transportation. The public transit network in this part of Toronto is very good, owing to a few nearby bus lines. Most houses for sale in this part of the city are located in places that are also quite convenient for walking; many daily needs can be carried out without the use of a vehicle, and there are also a fair number of businesses in proximity. Despite the fact that the area is flat, commuting by bicycle is challenging in this part of Toronto because there are few bike lanes.

Lawrence Manor has 8 Public schools, 4 Catholic schools, and 5 Private in this neighborhood, your kids can get a great education.

“Lawrence Heights Middle School is an exciting place to be and a great place to learn. We offer a comprehensive curriculum with a strong focus on core language arts and mathematics subjects as well as an emphasis on Science, Technology, Engineering, and Mathematics (STEM), the arts including drama, dance, visual arts, instrumental music, and health/physical education. Technology is integrated into the teaching and learning environment.” As originally published by Lawrence Heights Middle School

“Ledbury Park Elementary and Middle School are a Junior Kindergarten to Grade 8 school located in an economically diverse, multicultural, multi-faith and multilingual community near Bathurst and Lawrence. Our school is recognized for its strong parent-school partnerships. We pride ourselves in providing all students with the knowledge, skills, and opportunity to become successful individuals. Ledbury’s staff emphasizes a comprehensive academic program with a strong focus on literacy, numeracy as well as student engagement & empowerment. Vibrant co-curricular/after school programs enhance the growth and development of our students. We are constantly improving our incorporation of IT to help our students better prepare for the future.” As originally published by Ledbury Park Elementary and Middle School

“Baycrest Public School is a small, dynamic community school with dedicated staff, great students, and supportive parents. As a Model Cluster D5 School, we are fully committed to providing each child with a rich and varied program, focused upon innovative curriculum initiatives and founded upon the principles of equity in a caring, safe, and welcoming learning environment. We continue to maintain a thriving partnership with the Learning Through The Arts (via the Royal Conservatory of Music) and Arts For Children and Youth initiatives in integrating music, drama, and the visual arts throughout the curriculum.” As originally published by Baycrest Public School

“We work collaboratively to create a safe and nurturing environment in which students thrive and succeed. Flemington Public School is diverse in origin, united in achievement. The school is located in the Lawrence Heights Community, north of Lawrence Avenue, west of Bathurst Street. The school opened in 1958 and has a diverse student population, representing many different languages and cultural groups. More than 60% of our students have a primary language other than English.” As originally published by Flemington Public School

“École Glen Park Public School is located south of Lawrence Avenue just west of Bathurst Street. The school was newly constructed in 1998 and our facilities are very much “state of the art” with air conditioning, a huge gym with a partitioned lunchroom and kitchen for our Breakfast Program. Currently, our enrolment is approximately 470 students who are representative of families from a tapestry of cultural backgrounds. As a dual-track school, both French Immersion (SK entry point) and English programs are offered from Junior Kindergarten to Grade 6. We believe that our school should mirror a learning environment where staff and students enjoy learning and growing together in an atmosphere of safety, pride, and encouragement.” As originally published by Glen Park Public School

“The world’s only dedicated yeshiva for young men with hearing loss.” As originally published by Yeshivas Nefesh Dovid

“Bialik Hebrew Day School is committed to providing an exemplary Jewish and General education to children in Junior Kindergarten to Grade 8 from diverse Jewish backgrounds. Bialik fosters a strong Jewish identity that embraces the values of our Labor Zionist roots – inclusivity, social justice, and equality – in a warm and nurturing environment. Hebrew fluency, Yiddish language & culture, and a strong connection to Israel and the Jewish people are paramount. Our commitment to Jewish values, academic excellence, and innovation inspires our students to become future Canadian and Jewish community leaders.” As originally published by Bialik Hebrew Day School

“For years there was a demand by the parents for a high school that would provide their daughters with a Chassidic education during their most formative years, and education imbued with the beauty of Chabad Chassidus and its philosophy. The opening of this school is the realization of their dream. The school established in 1999 is named after the Rebbitzen Chaya Mushka Schneerson o.b.m. wife of the Lubavitcher Rebbe. The mission of the school is to create dedicated future leaders for the Jewish people, and role models for their respective families. The school provides a wholesome education for high school girls by emphasizing the positive approach of Chabad Chassidus and the Rebbe’s Vision of perfecting the world. Offers a full Hebrew and English program. English program is fully accredited by the Ministry of Education.” As originally published by Bais Chomesh High School for Girls

“Our Lady of The Assumption School fosters students’ excellence in academics, facilitates students’ faith development, and makes every effort to provide a safe learning environment for all of its members. With a steadily growing number of students who have been enrolled, Our Lady of The Assumption School is a welcoming place that reflects our values and beliefs. We strive to provide our students with many extracurricular opportunities and exciting educational opportunities. Moreover, we are a school focused on improving student learning and achievement.” As originally published by Our Lady of the Assumption Catholic School

“We are committed to providing all of our students an education rooted in our Catholic faith and values, sensitive to social and emotional needs and focused on academic excellence.” As originally published by St. Margaret Catholic School