Homes for Sale in Cliffcrest, Toronto 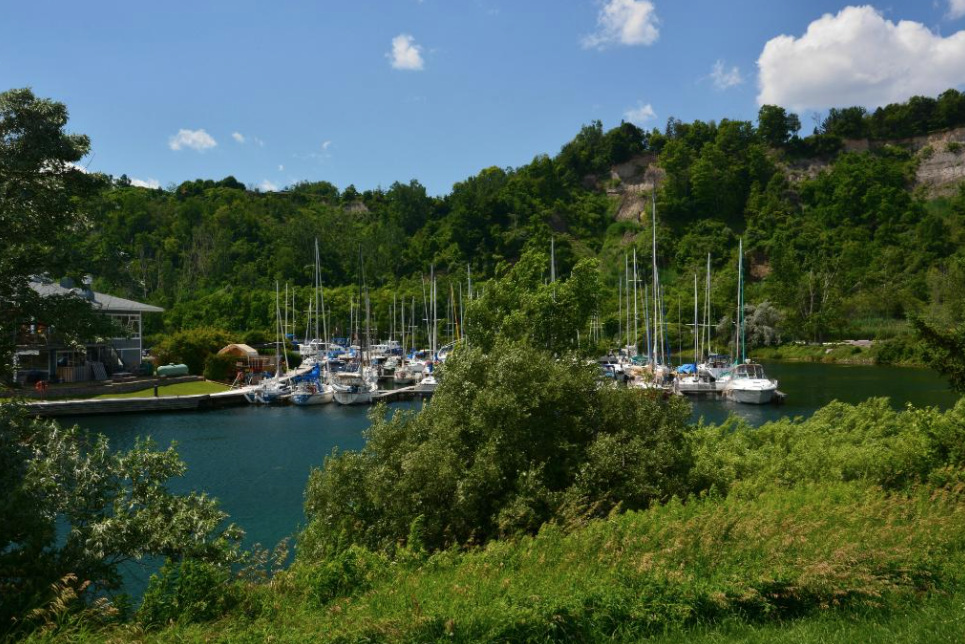 The Cliffcrest Toronto Real Estate neighbourhood was named in the 1960’s by city planners who were making obvious reference to the Scarborough Bluffs land formation that skirts the southern boundary of this neighbourhood. The Scarborough Bluffs are a natural wonder that was formed following the last ice age, some twelve thousand years ago. Archaeological evidence gathered in this area during the early 1900’s shows that the First Nations people established settlements along the Scarborough Bluffs dating back 10,000 years, making this one of the oldest inhabited sites in Toronto. The Toronto and York Radial Railway established the sixty acre Scarborough Heights Park on the crest of the Bluffs in 1912. This park was created for business purposes by the railway in order to attract more passengers to their line. Scarborough Heights Park closed in 1929 and the streetcar line was discontinued in 1936. Following the dismantling of the streetcar Kingston Road was widened to cater to the automobile age which ultimately led to the residential development of Cliffcrest in the 1940’s and 50’s.

Cliffcrest Toronto Real Estate is a family oriented community that looks and feels more like cottage country than a big city neighborhood. The lushness and natural beauty of this area emanates from the spectacular Scarborough Bluffs, whose towering sandy cliffs peer out over the Lake Ontario shoreline. The name Cliffcrest is in reference to the Scarborough Bluffs, which are sandy cliffs along the lake’s edge. The neighborhood feels much more like being at a cottage than being in Canada’s largest and most densely populated city. The area contains primarily large detached homes.

Cliffcrest Toronto Real Estate’s bungalows, storey-and-a-half houses, semi-detached homes and detached, two-storey houses were built in the late 1940’s and the 1950’s. There are also a number of newer, custom built houses found throughout this neighborhood. The residential pocket south of Kingston Road is filled with cozy frame cottages that provide the ambience of a cottage community. Some of these houses offer beautiful views of Lake Ontario.

Bluffers Park, located along the Lake Ontario shoreline, features a large, sandy beach and many fine picnic areas. This lakeside park also features a marina, yacht clubs, and a popular waterfront restaurant. Bluffers Park can be accessed by car off Brimley Road South. Tots Park, located at the south end of this neighborhood features a children’s playground and a baseball diamond. Halbert Park, in the north end of Cliffcrest Toronto Real Estate has a wading pool and an outdoor pool. The R.H. King Academy has an indoor pool that is open to the public at designated times for recreational and instructional swims.

Cliffcrest has 12 Public schools, and 7 Catholic schools, in this neighborhood, your kids can get a great education.

“Fairmount Public School was built in 1951 at the foot of Fairmount Avenue, now known as Dorset Road. Additions were made to the original 8-room building in 1953, 1956 and 1962. An interesting historical feature of the school is a set of three architectural sculptures designed by the builder, Murray Brown, depicting the basic skills of reading, writing and mathematics. These are on the outside north wall of the school. Centred in an older neighborhood, bordering on the Scarborough Bluffs, the school has seen a great fluctuation in enrolment over the years. Currently, the school population is stable as more young families move into the community. We currently house a Sunshine Daycare.” As originally published by Fairmount Public School

“We are R. H. King Academy, a school with a distinctive timetable, leadership pathways, and dynamic extra-curricular and athletics programs that will engage and inspire you. Our school’s motto is “We care. We strive. We serve”. We demonstrate a sense of caring through community involvement. We strive for academic excellence. We serve to meet the individual needs of each student. This three-fold mission is reflected in such areas as self-directed learning, a challenging curriculum, volunteerism, professionalism, the development of personal leadership skills, and the acquisition of technological and computer skills. R.H. King Academy’s unique program has been recognized by the National Quality Institute’s Canadian Hall of Excellence.” As originally published by R. H. King Academy

“David and Mary Thomson Collegiate Institute welcomed its first students in September 1958. Since then, Thomson has maintained a reputation for academic excellence. The programs for Grades 9 to 12 are semester to accommodate the program needs of all students. The school’s population of approximately 1100 is ideal for teacher/student mentoring. In Grade 9, students receive special attention throughout the year in order to ensure a smooth transition to high school. Extensive use is made of peer leaders in Grade 9 classes, as well as, PASS (Peer Assisted Student Success), and peer tutors.” As originally published by David and Mary Thomson Collegiate Institute

“Come to Laurier and enter a school where fairness, understanding, and mutual respect are practiced every day. Our beautiful natural setting provides a basis to integrate environmental awareness into our geography, science, art, and physical education courses. Our well-rounded programs offer you many opportunities for apprenticeship and workplace experiences. At Laurier, we are committed to the development of “character education”. Our goal is to establish behaviors and attitudes that are beneficial to the development of principled and contributing members of the community. The administrators, teachers, and support staff are dedicated to helping students make the most of their high school learning experience.” As originally published by Sir Wilfrid Laurier Collegiate Institute

“Mason Road Junior P.S. opened in 1957 and is located in Scarborough Village in the southeast region of the TDSB. The school serves approximately 400 students from a diverse neighborhood of apartment buildings, co-operative housing ventures, and single-family homes. The cultural and linguistic backgrounds of our students are quite varied, with over half of our students speaking a language other than English at home. We are proud of our richly diverse school and we try to engage with our community to enhance our students’ education experiences at Mason Road. Our dedicated staff members provide a welcoming and nurturing environment for our students and guests.” As originally published by Mason Road Junior Public School

“The Anson Park P.S. community is committed to working together to help students achieve their best academically, socially, and personally. Anson Park is a Kindergarten to Grade 8 public school which opened in 1959. It is named after the park located adjacent to the school. Anson Park P.S. serves a stable community. Many of our students’ parents attended the school as children. Our school population is approximately 250 students. Although we are a small school, we offer a wide range of curricular and extra-curricular programs. We value community involvement and our parents are active in supporting school-wide events and organizing activities.” As originally published by Anson Park Public School

“Bliss Carman Senior Public School is dedicated to serving the wide variety of needs exhibited by early adolescent students. We have a strong belief in inclusive education and we support that belief through our academic program, a variety of co-curricular programs, and student support and leadership opportunities. The school is named after William Bliss Carman (1861 – 1929), the Poet Laureate of Canada. The building is over 30 years old and in excellent condition, due to the efforts of our caretaking staff, Board maintenance staff, teachers, and students. We are located at Kingston Road and Bellamy Road South, and serve a large, multi-ethnic community.” As originally published by Bliss Carman Senior Public School

“Chine Drive Public School is perched on the Scarborough Bluffs overlooking Lake Ontario. This small school of 169 pupils is south of Kingston Road and east of Midland Avenue. Chine Drive P.S. was officially opened in September 1957, although the school had already been in operation for two years, housed in portables. Our school was built out of growing community concern for pupil safety as children had to previously cross the increasingly busy Kingston Road to go to school. Providing a safe environment in which children can learn and grow continues to be the focus of our school. Our mission statement is “to foster academic excellence, lifelong learning, social awareness, and mutual respect in a safe and welcoming environment.” As originally published by Chine Drive Public School

“H. A. Halbert Jr. Public School, built in 1951 and named after a school inspector, is nestled in a park-like setting in the Cliffcrest Community. As a TDSB Model Inner City School, Halbert students benefit from access to a variety of programs and services including vision and hearing screening. With the help of a Community Support Worker, parents participate in a variety of workshops geared to their expressed needs and interests. Teachers work, in consultation with Literacy and Numeracy Coaches, to assess and evaluate students, plan and implement classroom programs which utilize high yield teaching strategies and where instruction is differentiated to address the specific needs of all students.” As originally published by H. A. Halbert Junior Public School

“St. Theresa Shrine of the Little Flower, affectionately known as The Shrine, has been a second home to many students, parents, and staff over the years. We have celebrated over 60 years of excellence. Since it opened its doors as the first Catholic school in Scarborough, under what was then the Metropolitan Separate School Board, it has strived to uphold the ideals of Catholic education. St. Theresa Shrine embodies the true spirit of a Catholic community bringing together all members through academic, artistic, and athletic pursuits.” As originally published by St. Theresa Shrine Catholic School

“St. Agatha Catholic School was first built in 1964 and is located on Cathedral Bluffs Drive in the Scarborough Bluffs area of Toronto. Until the early 1980’s the school served only the local community. At this time, due to declining enrollment, it became the Scarborough school for French immersion. The school population currently sits at over 460 students, with approximately 60% of them in the French Immersion stream. We are a busy community with numerous sports teams and clubs. We also lead a number of initiatives to support those less fortunate, such as a Thanksgiving Food Drive and Christmas Gift baskets.” As originally published by St. Agatha Catholic School