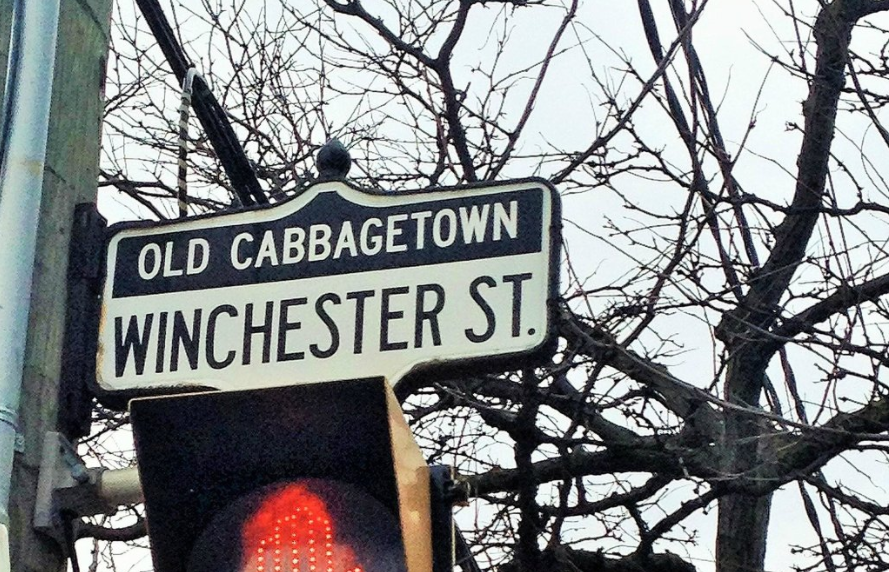 The area today known as Cabbagetown was first known as the village of Don Vale, just outside Toronto. Before the 1850s it consisted of farmland dotted with cottages and vegetable plots. It grew up in the 1840s around the Winchester Street Bridge, which before the construction of the Prince Edward Viaduct was the main northern bridge over the Don River. This was near the site where Castle Frank Brook flowed in the Don River. By the bridge, the Don Vale Tavern and Fox’s Inn were established to cater to travelers.

In the late 19th century the area was absorbed into the city. It became home to the working class Irish inhabitants who were employed in the industries along the lake shore to the south in Corktown. Brick Victorian-style houses were built throughout the area. The name Cabbagetown purportedly came from stories of new Macedonian and Irish immigrants digging up their front lawns and planting cabbage. In this era the Cabbagetown name most often applied to the area south of Gerrard Street, with the part to the north still being called Don Vale. It was a working-class neighbourhood, but reached its peak of prosperity just before the First World War, which is from when many of the brick homes in the area date.

The neighborhood is home to many artists, musicians, journalists and writers. Other residents include professors, doctors and social workers, many affiliated with the nearby University of Toronto and the many hospitals on University Avenue. Proximity to the financial district and downtown core have also made the area popular with other professionals such as lawyers, management consultants and those in financial services.

It largely features semi-detached Victorian houses and is recognized as “the largest continuous area of preserved Victorian housing in all of North America”, according to the Cabbagetown Preservation Association.

Immigrants from the Philippines, China, and South Asia, mainly. Most residents are families with kids in school and very few seniors live in the high rises. The average household income, concerning $30,000.

With limited options in terms of restaurants, cafes, parks and recreation, the lifestyle around St. James Town is centered around the home. Low incomes also contribute to the home-centric way of life. Families host little get-togethers with neighbors and friends after work and on the weekends and when possible, head downtown or into nearby Cabbagetown or Church and Wellesley for a change of scenery.

Toronto’s Riverdale Farm covers 7.5 scenic acres and is a hot spot for families. Along with the wooded areas, ponds, and gardens, there are plenty of farm animals to visit. All this and more in the heart of downtown Toronto. It is a total pleasure to wander at Riverdale Farm, with its fine gardens, an array of farm animals, view over the Don Valley, and familiar farm smells. The kids will definitely love it, but grown-ups can also find some bliss there too.

The central Neighborhood House, Toronto Kiwanis Boys & Girls Clubs, and the Cabbagetown Youth Centre are among the many community organizations calling the area home. Transit-wise, commuters can take the subway to Castle Frank station, a streetcar along Carlton-Gerrard, or buses along Jarvis, Parliament, and Wellesley streets.

Rose Avenue Public School is the only school within the borders of St. James Town and is where most of the kids who live in the surrounding towers attend class. There are, however, a couple of other public schools nearby, as well as a Catholic school and a private academy called Toronto New School. Attached to Rose Avenue School is a community recreation center with a gym and meeting rooms. And while the so-called green spaces at the bases of the apartment buildings can barely be called parks, the neighborhood is close to several parks.

Cabbagetown has 13 Public schools, and 4 Catholic schools, in this neighborhood, your kids can get a great education.

“Founded in 1807, Jarvis C.I. is the first public high school in Toronto and has a long tradition of academic excellence and student involvement. Jarvis is committed to providing a rich and varied program encouraging higher-order thinking as well as research and communication skills. Over 90% of our graduates attend university, including top schools like U of T, Waterloo, Dalhousie, and Queens. Over 53% of graduates are Ontario Scholars and 60% receive scholarships/bursaries. Situated in the ‘heart of the city’ at Jarvis and Wellesley, our school has a rich mix of students from over 100 countries of origin, integrated into one unified, vibrant community in which diversity is our strength!“ As originally published by Jarvis Collegiate Institute

“Since 1907, Riverdale Collegiate has established a reputation for academic excellence and strong community involvement. Riverdale is home to a modern library learning commons and students regularly use technology to enhance their learning. The academic program is complemented by a wide variety of clubs and sports such as the Riverdale Environmental Action Committee, SASSD, yearbook, athletics, music, and theatre. Our school prides itself on a strong spirit of community.” As originally published by Riverdale Collegiate Institute

“Earl Grey provides excellence in education for our adolescent students, as well as a full range of quality co-curricular activities ranging from athletics to leadership opportunities. Through a partnership with the home, staff provides opportunities for students to learn and grow intellectually, socially and emotionally. Character Education drives Earl Grey’s Caring and Safe school vision, which links to our school-wide Code of Conduct. Each member of our community has clearly outlined responsibilities which accompany her/his rights.” As originally published by Earl Grey Senior Public School

“Lord Dufferin P.S. is a downtown inner-city school serving families in the Regent Park community. The old building was built in the 1920’s with additions in the late 1940’s. A new school building was completed in January, 2000. In the fall of 2003, the school yard was landscaped with the addition of a baseball diamond, soccer field, walkway to Berkeley Street and new fencing. In May, 2008, a new play structure was donated and built by the Kids Around the World Organization and the Million Dollar Round Table Foundation.” As originally published by Lord Dufferin Junior and Senior Public School

“Winchester Public School, a SK-8 elementary school, has been serving the students of the Cabbagetown and St. James Town neighborhoods since 1874. The diverse student population represents over 40 countries and languages, with Tamil students composing the largest non-English speaking group. Winchester is a single track French Immersion Centre. We place a strong emphasis on ensuring a safe, welcoming, and respectful learning environment where all students can and will learn.” As originally published by Winchester Junior and Senior Public School

“Withrow Avenue Public School is situated in Riverdale. The school has rich history and celebrated its 100th Anniversary in 2003. The school’s current building was constructed in 1972, and was designed around the open-concept model that was commonplace for the times. We are a dual-track school, offering both an English and Early French Immersion program to approximately 600 students. The building also houses the Withrow Childcare Centre as well as Quest Alternative Senior School. Withrow is also a focal point for the community and is used by community groups outside school hours” As originally published by Withrow Avenue Junior Public School

“Jesse Ketchum Public School is located at Bay Street and Davenport Road near Yorkville Village. The school was established around 1831 and the present building dates from 1914. The school is named after Jesse Ketchum, a philanthropist who donated the land to the School Board to build the school and to the city for the park. The school serves a diverse population of approximately 400 students, whose cultural backgrounds represent many countries from around the world. There are more than 40 different languages spoken in the homes of our students. At Jesse Ketchum, our students build self-esteem and confidence, learn to work together in mutual respect and trust, and value diversity.” As originally published by Jesse Ketchum Junior and Senior Public School

Rosedale Heights School of the Arts

“We provide students with a unique educational opportunity by preparing them for university and college through challenging academic programs with an emphasis on the performing and visual arts. Our facilities include computer and science labs, technology and video communications equipment, dance studios, drama studios, music studios, a dark room, visual arts studios, a fitness center, and a swimming pool. Rosedale offers a wide selection of courses in academic and artistic areas of study complemented by numerous opportunities for extra-curricular involvement in student clubs and sports.” As originally published by Rosedale Heights School of the Arts

“Rose Ave. P.S. is a vibrant downtown inner-city school located in the center of St. James Town. Our diverse student population is drawn from the 22 apartment towers, housing over 27,000 people in one of the most densely populated and multicultural communities in North America. The school has a student population of over 650. More than 85% of the students have English as their second language, representing about 50 language groups. We have a strong instructional focus on literacy, numeracy, the arts, and the environment. As well, we have embarked upon a multi-year arts partnership with Manulife, Inner City Angels, and Mariposa in the Schools with the theme, “Hold up the Sky.” We are proud recipients of the Indigo Love of Reading Grant.” As originally published by Rose Avenue Junior Public School

“Sprucecourt Public School is a Kindergarten to Grade Eight school in the Cabbagetown area of Toronto. The school population averages around 330 students, many of whom are second and third language learners. The largest language groups other than English are Bengali, Mandarin, Cantonese, Tamil, and Somali. We strive to make all children and families feel welcomed at Sprucecourt.” As originally published by Sprucecourt Public School

Our Lady of Lourdes Catholic School

“The learning community of Our Lady of Lourdes thoughtfully maintains a safe and caring environment wherein all students develop their learning potential. Literacy and numeracy skills are a central focus as are faith development, the arts, social justice and athletics. Together, all of these aid in developing the character attributes that are the hallmark of caring and creative citizens.” As originally published by Our Lady of Lourdes Catholic School

“Our Catholic Schools contribute to the formation of our children in their faith life. In partnership with the home and parish our students grow in the knowledge of prayer, scripture, and Catholic teaching. OLPH enjoys a strong partnership between home, school, and the parish. Parent volunteers play an active role in enriching the educational experience of our children.” As originally published by Our Lady of Perpetual Help Catholic School