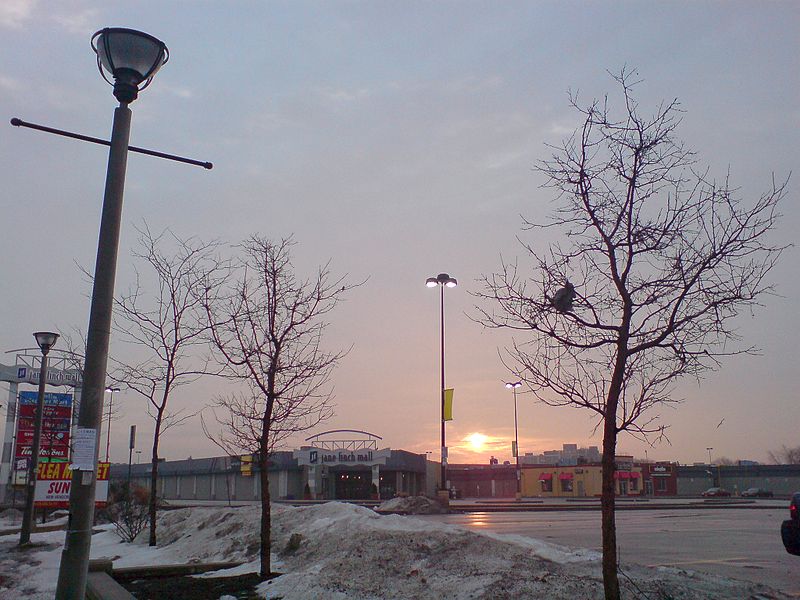 Glenfield-Jane Heights, more well known as it’s previous branding, Jane and Finch, it is a neighborhood in northwestern North York known for it’s a large and diverse community. This community borders Highway 400 and lies south of Finch Ave. West. It borders on the west side of Black Creek.

Like the majority of Ontario at the time, the community started as a farming village and slowly expanded into a town as more people settled in. The neighborhood’s first title was Elia, North York.

Skipping forward a few years to 1954, the government decided to use the land to build 3000 low-cost houses. The plan for building York University had also cut out around 400 acres of farmland. The rest of the land was used for commercial and industrial development in later years.

The year 1962 was when the neighborhood was first officially named District 10 and was planned out to be a modern community of low, medium, and high-density housing, employment, recreational opportunities, and social services. The community adopted the name Jane & Finch because of the increasingly popular intersection in the center of District 10. They had succeeded in growing the community however, most of the growth came from rentals and public housing.

Jane-Finch was originally developed as a model suburb in the 1960s in response to the rapid urban growth of Toronto. The neighborhood is made up of single-family detached and semi-detached houses, along with a large number of high-rise apartment buildings. Being one of the most visible minority concentrated communities in the City of Toronto, the Jane-Finch community hosts a number of cultural activities. It is home to a large immigrant population, with a high percentage of Spanish, Italian, and Vietnamese speaking residents, most of whom live in high-rise apartment buildings and semi-detached houses. Jane-Finch Mall is popular for shopping, and a number of parks, including Firgrove, Oakdale, Spenvalley, Stanley, along with parts of Derry down, Topcliff, Downsview Dells, and Northwood.

Glenfield – Jane Heights is a west Toronto neighborhood notable for its singles, renters, salespeople, tradespeople, and manufacturing workers. It has a higher than average population of immigrants, particularly those from Italy and Vietnam, and Italian, Spanish, and Vietnamese speaking. With the majority of the housing being semi-detached, these are the best types of residences that buyers will look into. Along with the abundant amount of renting and buying available apartment space, plenty of housing is found with fairly reasonable pricing on clean and safe streets within the neighborhood.

The community is one that is very diverse and full of different cultures that merge and grown off of one another. It is common to see street musicians and merchants expressing their culture in means of making a profit.

A go-to location in this neighbourhood is the Jane & Finch Mall. With over 70 different retailers, most of them being small market booths, this mall offers a very different experience from the typical all-brand shopping centers popular in urban societies. This mall is run by the community for the benefit of the community and it has been this way for a very long time.

Glenfield – Jane Heights has two Toronto Public Library locations, the bigger one being on Jane and Shepard, on the southern end of the neighborhood. While the smaller library, Yorkwoods Library on Finch Ave. West, is on the northern end o the neighborhood. Both libraries offer not only wide selections of books but also interesting hobbies and programs for all ages.

The second most famous mall in the area is Yorkgate Mall which is just across the street from Jane and Finch mall and holds more name brand stores and eateries. Recently, they had opened up a Planet Fitness center which has gathered more attention to the mall from those in the neighborhood and those outside of it who do not have a fitness center near them. It is both a convenient and wise addition to the overall attraction of the mall and it’s greater community.

Several major roadways bound the neighbourhood, including the two namesake streets that form its core; Jane Street and Finch Avenue. Other major thoroughfares that pass through the neighbourhood are Steeles Avenue to the north, Sheppard Avenue to the south, and Highway 400 to the west. Highway 400 is a controlled access highway that forms a part of the province’s 400-series highways.

Plans to construct a light rail line through the neighborhood, the Finch West LRT, are presently underway and is expected to open in 2023,[14] and a community hub for the Finch West LRT is planned to be built.

It has 11 Public schools, 6 Catholic schools, in this neighborhood, your kids can get a great education.

“Yorkwoods Public School is located in the northwest part of the Toronto District School Board. We serve the educational needs of a vibrant and diverse community. The school was built in the late 1960s and has undergone extensive interior and exterior restoration. The school serves 410 students representing more than 25 different languages. Though the majority of our students were born in Canada, our school is further enriched by the presence of students born in 37 other countries.” As originally published by Yorkwoods Public School

“Stanley is a Junior Kindergarten to Grade 5 school located near Jane Street and Sheppard Avenue. The Stanley community represents a richness of cultural backgrounds and languages with more than 25 different countries of birth and languages represented in the school. Stanley offers a Grade 4 and Grade 5 Gifted and Extended French Program. Stanley also offers Full Day Kindergarten. The Dominico DiLuca Community Centre next to the school offers many after school programs. The Continuing Education Department operates ESL programs for adults.” As originally published by Stanley Public School

“Beverley Heights Middle School is situated in a quiet residential area in the Black Creek Community. As a triple track Middle School, we provide English, Immersion, and Extended French programs for students in grades 6,7, and 8. Beverley Heights is a multicultural school, with over 30 languages represented in various cultural and ethnic groups from all over the world. We are proud of this diversity and celebrate the richness that it brings to our school. Our dedicated staff works closely with parents to create a kind and caring learning environment. We are proud of our reputation as a safe and inclusive school, fostering opportunities for student success. Our mission is to ensure that all students achieve their highest level of ability.” As originally published by Beverley Heights Middle School

“Calico Public School is located in a residential area near Jane and Sheppard in the former Spenvalley area. Our dedicated staff works closely with parents to create a kind, caring, and inclusive learning environment. The school addresses the learning needs of 300 students from 19 countries, representing 27 language groups. 54% of our students and parents speak a language other than English at home. Calico shares facilities with Calico Saints Child Care as well as Section 23 Program Administrators who are responsible for the Care, Custody and Treatment Programs.” As originally published by Calico Public School

“C.W. Jefferys Collegiate Institute is a semester school located at Finch and Sentinel, between Jane and Keele, and is in close proximity to York University. It was founded in 1965. The school was named after Charles William Jefferys, a Canadian artist whose work has contributed to education in the areas of Canadian History and Art.” As originally published by C. W. Jefferys Collegiate Institute

“At Westview, we offer a varied academic program with a strong focus on numeracy, literacy, science, the arts, and co-op. Students at Westview have extensive opportunities to expand their learning through programs such as the STEPS to University of Toronto partnership, the SHSM programs which focus on Healthcare and Arts and Culture, and the LAWS program which empowers students to see the world through a legal lens. At Westview expect our students to continuously and effortlessly impact the world around us. We welcome you to the Westview family.” As originally published by Westview Centennial Secondary School

“Topcliff Public School is located at the southeast corner of Jane Street and Finch Avenue in North York, a short distance away from the beautiful Grande Ravine. Since its opening in 1969, Topcliff proudly serves a diverse community of students from Junior Kindergarten to Grade 5. The diversity of traditions, languages, and perspectives in the Topcliff Public School community provide an enriched and exciting learning environment for students and staff alike. The school’s population is 400 students. We are a dual-track school, offering English and French Immersion.” As originally published by Topcliff Public School

“Oakdale Park Middle School is a large school of 548 students in an urban setting, serving Grade 6, 7, and 8 students. It is located in the North West area of Toronto. About 30% of our students are of Caribbean heritage, about 30% are of Southeast Asian descent, and about 15% of our students are of South American descent. The remaining 25% of the students come from almost every other part of the globe.” As originally published by Oakdale Park Middle School

“St. Jane Frances Catholic School is an elementary school providing programs for students from Junior Kindergarten to grade eight. The school provides ESL Programs for new Canadians from grade four to grade eight. Special Education Programs are provided for Special Needs students. The school also has a Junior/ Intermediate Behavioral Program along with classes for students with Multiple Exceptionalities and Learning Disabilities. St. Jane Frances is an Extended Day School offering the students the opportunity of taking classes in either Spanish or Italian.” As originally published by St. Jane Frances Catholic School

“Our students, like all young people, vary in interests, learning needs and learning styles, social maturity, self-confidence, and readiness for learning. Most of our students are from European (Italian) and some are from South American (Spanish) heritage. Although our students speak English, they understand their heritage language. At Blessed Margherita, we aim to create a school environment where all students can mature in academic and interpersonal skills, supported by staff and each other.” As originally published by Blessed Margherita of Cittá di Castello