Homes for Sale in Brookhaven-Amesbury, Toronto 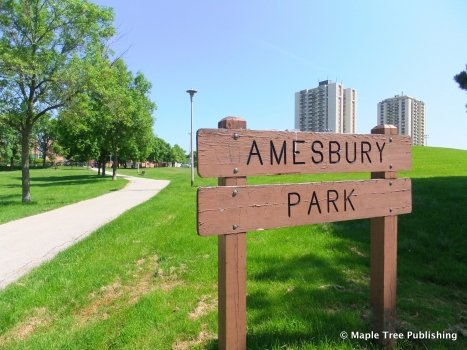 In 1804, it is documented that a United Empire Loyalist named John Denison, owned local property in what is Brookhaven-Amesbury now. The Denison family played a positive role in the political and military grounds in the process of Toronto’s development. This led them to become influential during the establishment of Toronto. After a couple of years in 1940, the family-owned area was opened to interested residents for living. This stopped the cycle of all family and relatives owning the land area.

Members of the Denison family continued to own property in Amesbury right up until the early 1930’s. The present day Amesbury neighbourhood was subdivided for residential development in the 1940’s.

Amesbury, east of Black Creek Drive features curvilinear streets and numerous culs-de-sac that are complimented by well-kept bungalows and story-and-a-half brick houses. There are only a small number of semi-detached houses in this part of the neighborhood. These houses were built in the 1950s and early 1960s.

The older homes west of Black Creek Drive include smaller two-bedroom bungalows, an abundance of semi-detached housing, and a handful of newer homes. The streets circling Harding Park are lined with “Veterans Housing” or “Victory Housing.” These cozy dwellings were built in the late 1940s and early 1950s for returning World War II veterans and their families.

The Brookhaven-Amesbury population (nearly 18,000 residents live in the neighborhood according to the 2011 census) is also diverse with Spanish being the most common non-official language. From 2001 to 2011, the percentage of residents listing Spanish as their Home Language doubled to 7.1 percent.

The neighborhood’s age demographics have also changed during that same time span, with the number of seniors (age 65+) growing by 31.4 percent.

The North Park Plaza situated at the south-east corner of Keele Street and Lawrence Avenue has a Wal-Mart department store, a large supermarket, a popular video store, small independent retailers, fast food restaurants, and professional and medical offices. The Lawrence and Black Creek Plaza include restaurants, a dry cleaner, a photoshop, and professional and medical offices.

The Amesbury Community Centre at 1507 Lawrence Avenue West is an ultra-modern facility with a gymnasium and meeting rooms. This center offers kindergym, music, art, and dance programs for preschoolers. Some of the other programs offered at this community center include a Junior Kids Club, Senior Youth Basketball, Family Karate, and country, ballroom, and square dancing.

The Amesbury Sports Complex at 155 Culford Drive, is located to the west of the community center and has four indoor bocce courts, an outdoor hockey rink, a swimming pool, and a basketball court.

Amesbury is well served by public transit with north-south bus routes on Keele and Jane Streets and east-west bus lines on Trethewey Drive and along Lawrence Avenue. There is also a rush-hour bus service that runs along Maple Leaf Drive, Culford Road, and Gulliver Road. All of the aforementioned bus routes provide connections to either the Bloor-Danforth or the Yonge-University-Spadina subway lines.

For motorists, Black Creek Drive runs through the center of this neighborhood. This scenic thoroughfare connects commuters to Highways 400 and 401.

Brookhaven-Amesbury has 10 Public schools, and 6 Catholic schools, in this neighborhood, your kids can get a great education.

“Since our doors first opened in 1929, York Memorial Collegiate Institute has earned a well-deserved reputation for excellence. Our wide range of course offerings, an extensive extra-curricular program, and a traditional year-long timetable continues to attract students from across Toronto. In addition, York Memorial offers students specialized programs that include the R.U.S.H. (Roadmap to University Success with Honors), Pre – AP and Advanced Placement (AP) programs. York Memorial is leading the way in offering a wide range (14 courses) of Advanced Placement courses in all subject areas and is currently ranked first among all public schools in Ontario. York Memorial is recognized nationally and internationally by many universities.” As originally published by York Memorial Collegiate Institute

“Established in 1857, Weston Collegiate holds the distinction of being the second-oldest secondary school in Toronto and in 2007 celebrated its 150th anniversary. Once positioned in the heart of what was the quaint but industrious town of Weston, today, Weston is home to the world, with current students representing 80 countries. As a result, Weston is international in focus and spirit. We strive to meet the needs of all students in our community by offering courses at the academic, applied and locally developed level. We prepare students for university and college admissions, as well as offer programs in the skilled trades that lead to work or apprenticeship.” As originally published by Weston Collegiate Institute

“Amesbury Middle School prides itself in serving students from an increasingly diverse community. Our students, parents, staff and community reflect many cultures that provide our school with a richness that is nurtured and cherished. Amesbury students are continuously challenged to “Soar to Excellence”. Each student has the opportunity to receive a curricular-based program, which is challenging, supportive and reflects each individual’s personal learning style and needs. Students have the opportunity to develop their literacy and social skills within all aspects of the academic program, the elective courses and co-curricular activities.” As originally published by Amesbury Middle School

“Brookhaven Public School is located in the Black Creek Drive and Lawrence Avenue area. The original school dates from 1949 and was rebuilt in 1992. The school’s enrolment in January 2015 was 430 students. Our students represent over 29 different language groups and 19 countries. Brookhaven is a Kindergarten to Grade 5 school, with a Full Day Kindergarten program. Brookhaven Day Care is housed in our school. Care is provided for 2 1/2 – 6-year-olds and the school-age program is for 6 – 12-year-olds.” As originally published by Brookhaven Public School

“Charles E. Webster is committed to improving the literacy and numeracy levels of our students. Our junior public school, in the Keele/Eglinton/Trethewey area, reflects the diverse community in which it is located. To serve the needs of our community, we offer many programs including English As A Second Language (ESL); Parenting and Family Literacy Centre for parents and their children up to 6 years; Settlement and Education Partnerships in Toronto (SEPT) worker; and specialized learning. C.E. Webster is a certified SILVER EcoSchool which is committed to greening the schoolyard and to recycling waste.” As originally published by Charles E. Webster Public School

“At St. Bernard Catholic School our mission is to provide a caring Christian environment in which the qualities of self-esteem, creative thinking, a love of learning and respect for self and others are thoroughly and consistently nurtured. We believe that education is a life long process involving physical, mental, emotional and social development and that we must continually strive to develop in partnership with home school and parish. This link will assist students on their journey to become happy, responsible and contributing members of society.​” As originally published by St. Bernard Catholic School

“Immaculate Conception Catholic School opened its doors in September 1961 to 221 students and eight teachers. In 1967, an addition to the school was completed. It included a gymnasium with change rooms, an equipment room, six new classrooms, additional office space, and a storage room. The feast of the Immaculate Conception is celebrated on December 8. It was proclaimed an official feast day in 1854 by Pope Pius XII. It honors the Virgin Mary and the fact that, out of all the women in history, God chose her to be the mother of His own Son, Jesus. The school motto, as represented on the school crest–“courage, dedication, discipline and skill”–was developed by a former teacher in 1967. These are qualities the staff, students and parents work very hard to achieve.” As originally published by Immaculate Conception Catholic School

“Our school’s mission is to offer our students a rich spiritual, academic, and cultural formation in the light of the Gospel values, challenging them to achieve excellence in a stimulating, culturally rich, community-based, and welcoming environment. Together with the Catholic School Advisory Council, the School strives to provide our students with the most current educational and technological resources available to us through the Ministry of Education and the School Board to enhance their learning opportunities.” As originally published by St. Demetrius Catholic School

“St. Francis Xavier Catholic School is a growing, vibrant community servicing students in Full Day Kindergarten to grade 8. As a Catholic school committed to developing Catholic Graduates, we see education as a process through which students learn every day through the teachings of the life of Jesus Christ. Through daily prayer, the modeling of the Christian way of life and the celebration of the sacraments, we learn the meaning of Faith, Hope and Charity.” As originally published by St. Francis Xavier Catholic School